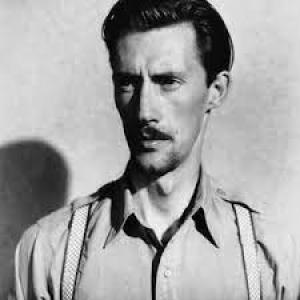 John Carradine had a film career of over 60 years and never became a big star, but his screen presence and authenticity was cherished by film lovers all over the world for decades. Born in 1906, he was inspired as a youngster by Shakespeare and worked as a touring actor in repertory companies doing the Bard as much as possible before he fell into film work in the late 1920s. Cecil B. DeMille admired John’s baritone voice and had him do voice work just as the talkies were becoming the dominant medium for film and he got his first screen credit for Tol’able David in 1930.

He embarked on a run of uncredited or bit parts for several years, lending his unmistakable visage to early horror classics like The Invisible Man, The Black Cat and The Bride of Frankenstein, before John Ford plucked him from semi-obscurity to cast him as the memorable Sgt. Rankin in The Prisoner of Shark Island. A follow up role for Ford in Mary of Scotland and he was suddenly an in demand supporting actor making a dozen films every year, with good directors like Henry King and Victor Fleming recognizing his value. Otto Preminger used him to advantage in a couple of his early Hollywood films and would stick with him post-war in the excellent noir, Fallen Angel.

'Oh, Ford was a peculiar man. You had to know how to handle him. Actors were terrified of him because he liked to terrify them. He was a sadist.'
~ John Carradine

It was John Ford though who used Carradine as a member of his so-called stock company and gave the actor several memorable roles in Ford classics like Stagecoach and The Grapes of Wrath where his dignity and pathos as Casy inspires Fonda's Joad. . Carradine’s ability to project a deep humanity was perfect in the sympathetic roles Ford gave him, a perfect fit of actor and character. Henry King used him as Bob Ford in two Jesse James related westerns, and he found good work with ex-pat European directors Fritz Lang (Western Union, Man Hunt) and Jean Renoir for Swamp Water.

Carradine fell into a pattern in the 1940s of doing support work for A-list projects while starring in many low budget B movies for jobbing directors like Ed Ulmer (Isle of Forgotten Sins) or Steve Sekely (Revenge of The Zombies). This seemed to sum up the duality of Carradine - able to convey the gravitas and depth of serious drama, but also able to find the humourous or strangeness in less serious pieces. It may speak to his almost other-worldly, ethereal presence at times, in that he was able to convey men on the edge convincingly, so effectively that he rarely was given ‘everyman’ run-of-the-mill parts. As he got older the small parts in great films gave way to bigger parts in bad films, but there were notable highlights. Nick Ray used him in his rogues gallery of types in the offbeat western Johnny Guitar and Burt Lancaster cast him in the fine conventional western he directed, The Kentuckian. His old pal DeMille used him in the grandiose The Ten Commandments and Ford dusted him off for bits in The Last Hurrah, The Man Who Shot Liberty Valance and Cheyenne Autumn.

Carradine was a staple in dozens of low budget horror films in the ‘70s and ‘80s (the profitable legacy of his early horror associations) but was still roped into good supports or bit parts for A-list directors like Martin Scorsese (Boxcar Bertha), Don Siegal (The Shootist) and Elia Kazan (The Last Tycoon). His versatility even got him a part with Woody Allen for the sex spoof, Everything You Wanted to Know About Sex. He worked for J. Lee Thompson in the Bronson vehicle The White Buffalo and for Burt Kennedy in the Jim Thompson adaptation, The Killer Inside Me – films that may be better remembered than Satan’s Cheerleaders or Vampire Hookers, more campy horror trying to cash in on Carradine’s spooky cache. John Carradine worked until the late 1980s, still maintaining a strenuous workload, appearing in Francis Coppola’s Peggy Sue Got Married and even voicing some animation with his distinctive timbre and singular intonation, a reminder of how he got his start with DeMille all those years ago.

'I've made some of the greatest films ever made--and a lot of crap, too.' ~ John Carradine

John Carradine’s career is a testament not just to longevity, but to a huge work ethic - in an industry where regular unemployment is a given, he worked consistently for six decades, obviously not turning down much, regardless of quality. This makes his filmography difficult to navigate, alternately packed with great films and nonsense films. Not blessed with movie star looks or athleticism, his versatility and authenticity saw him make an indelible impression on cinema and TV and he became one of the most recognizable faces that viewers might not always have been able to name. His chaotic personal life led to several children from four wives, four of which went into the business and carried on his name, a byword for reliability and value, whatever the project. He was also a reminder that masculinity didn't always look like Clark Gable, or Spencer Tracy and that odd looking, askew characters had their place in the world, maybe touched with a little madness for seasoning and impish preening for ambiguity, but most of all to say humanity is a broader spectrum than found in mainstream Hollywood.
To odd fellows everywhere - well played Sir.