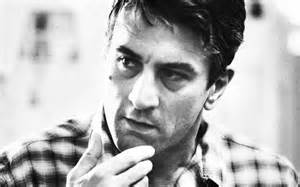 You talkin' to me?

“And even now I still know of nobody who can surprise me on the screen the way he does — and did then. No actor comes to mind who can provide such power and excitement.”   ~  Martin Scorsese on Robert De Niro

Of all the inheritors of Brando’s legacy, Robert De Niro stands proudly in the front rank, one of the few actors that could tap into the same range of intensity and nuance that Brando became synonymous for. De Niro started in feature film in the late ‘60s but made a real impact in Martin Scorsese’s Mean Streets  in 1973. After having been passed over in 1972 for the role of Michael Corleone in The Godfather,  Francis Ford Coppola made amends by casting him as the young Vito Corleone in The Godfather II,  appropriately the role Brando took in the original. The performance earned him an Academy Award and De Niro has been the pre-eminent male actor on American films ever since.

For the next decade De Niro dominated American cinema with a series of unsurpassed characterisations in such fine films as Travis Bickle in Scorsese’s blistering Taxi Driver and Michael in Cimino’s epic, The Deer Hunter.  His work on New York, New York  (again with Scorsese) and on The Last Tycoon  for legendary director Elia Kazan, spoke to his versatility, as did his Italian language epic for Bertolucci, 1900.  Having secured his position as Brando’s première successor, underlining the point by working with Kazan, Coppola and Bertolucci, he consolidated it by winning the Academy Award for Best Actor with his immortal portrayal of Jake La Motta in Scorsese’s masterpiece, Raging Bull  in 1980.

"Bobby is one of a select number of actors I've directed who work hard at their trade, and the only one who asked to rehearse on Sundays. Most of the others play tennis. Bobby and I would go over the scenes to be shot. Bobby is more meticulous... he's very imaginative. He's very precise. He figures everything out both inside and outside. He has good emotion. He's a character actor: everything he does he calculates. In a good way, but he calculates." ~ Elia Kazan on Robert De Niro

To avoid being typecast in Mob type roles he branched out with some fine satirical and comedic performances in smaller films like King of Comedy,  Brazil and Midnight Run,  and some fine introspective roles in True Confessions  (opposite Robert Duvall) and Awakenings.  De Niro’s fruitful and symbiotic partnership with Scorsese’ memorably continued in the ‘90s with two seminal gangster roles in the thematically linked Goodfellas  and Casino,  and with his unforgettable turn as the criminal Max Cady in the darkly satiric and much misunderstood Cape Fear.  Other essential roles from that period are found in Michael Mann’s stellar crime epic Heat,   which gave him screen time with his friend and arch rival Al Pacino for the first time, and in James Mangold’s excellent Copland, which paired him with old friend Harvey Keitel.

In the 20 years plus since those glory days De Niro has ranged far and wide across the cinematic landscape, embracing comedy and character roles with great aplomb. His access to meaty and well written roles has been patchy since he’s reached a mature age, but his level of commitment and attack on any role he takes is a lesson in the art of the actor. Robert De Niro may well be forever associated with the gangster roles already mentioned (and his performances in Sergio Leone’s superb Once Upon a Time in America  and De Palma’s The Untouchables  also stand tall) De Niro will be remembered as the premier actor of his generation. Like Brando before him he had a hard time incorporating the more ‘showbiz’ aspects of the job, making many awkward and taciturn interviews the equivalent of pulling teeth for hapless interrogators. He has mellowed in his older years and now is an accomplished self promoter and champion of new filmmakers. It’s possible his finest roles are behind him, but being the towering talent that he is, you write him off at your peril.

Angel Heart
Analyse This
We're No Angels
Meet The Fockers