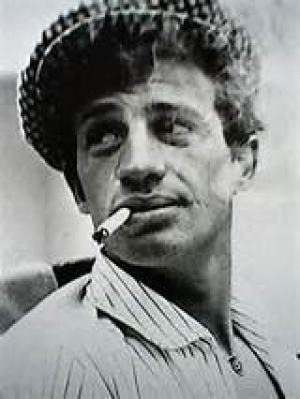 "There used to be just one way. There was one way you could do things. There were people who protected it like a copyright, a secret cult only for the initiated. That's why I don't regret making Breathless and blowing that all apart."
~ Jean-Luc Godard

If Jean Gabin was the ultimate French film star of the classic era, then Jean-Paul Belmondo fits the bill to fill his shoes during the Nouvelle Vague  era. The difference would be roughly the same distance between Bogart and Brando, an indicator that ideas about masculinity were evolving in Europe in much the same way as they changed in the US post WWII. Belmondo was the son of a sculptor and found some success as a boxer before moving into films in the late 1950’s where his angular athletic build and roguish, insolent presence set the tone for a new wave of French cinema, something fresh and urgent and separate from the much derided cinema du papa.

Belmondo worked on the stage before making an association with Jean-Luc Godard, making the directors first short and first feature film, the revolutionary À bout de soufflé (Breathless).  Claude Chabrol cast the young actor in the stylish À double tour  at approximately the same time and his association with the new school of filmmaking was assured. Peter Brook made it a certainty after teaming him with one of the key female actors of the era, Jeanne Moreau, in the vastly under-rated gem Moderato Cantabile,  and Belmondo’s future as a romantic screen icon became obvious to all.

Jean-Pierre Melville, the Godfather of the Nouvelle Vague, recognised Belmondo’s charisma and promise and cast him in two very different roles, firstly as the introspective priest/philosopher in Leon Morin, Priest,  and then as a gangster trying to escape his past in the excellent policier, Le Doulos.  In the early 1960’s his output was prolific (27 features in 7 years) as he rode the new wave for all it was worth, starring with Anna Karina, Sophia Loren, Françoise Dorléac in films by Godard, Vittorio De Sica and Phillipe De Broca before working again with Moreau in Marcel Ophul’s (son of Max) very fine Banana Peel.  He crowned this fertile period with one of his best efforts, the masterful, anarchic and ground-breaking Pierrot Le Fou, teaming again with Godard and Karina.

Belmondo continued to work with talented directors, veteran René Clément in Is Paris Burning?  and new wave contemporary Louis Malle in The Thief of Paris,  before finally working with François Truffaut and Catherine Deneuve (sister of Françoise Dorléac) in Mississippi Mermaid.  The actor enjoyed one his greatest commercial hits in Jacques Deray’s Borsalino,  an energetic and stylish gangster film in which he co-starred opposite his great rival Alain Delon, before he proved his acting credentials in a dramatic role for new wave icon Alain Renais in the political thriller Stavisky in 1974.

In the latter part of his career Belmondo settled into a series of crime and action films, notably with Georges Lautner, and enjoyed great box office success up until the late 1980s when he backed away from consistent appearances in film and moved back into theatre work. He added a late flourish when he starred for his old directors Deray in a crime flic called Le Solitaire  and for Claude Lelouche in the drama that finally won him a Best Actor in the Cesar’s, Itinéraire d'un enfant gate  in 1988. Patrice Leconte made a typically clever and witty film from the brilliant idea of casting Belmondo and Delon as the possible fathers of Vanessa Paradis in Une chance sur deux  and in 2008 Belmondo made Un Homme et Son Chien  an appropriate enough remake of the Vittorio De Sica classic, Umberto D, playing an old man coming to terms with loneliness, poverty and death, but the film was so poorly directed it will serve as a poor swansong for a great actor.

Jean-Paul Belmondo’s reputation rests on a fine body of work over a near 20 year golden period, full of performances that sparkle and bite from an actor with undeniable screen presence, and one not short of boldness or range. Belmondo’s ability to play the knowing, lascivious lothario or the self-deprecating smart arse served him well, from romantic to comedic roles he lit up the screen and changed the way audiences understood the French male as he effortlessly embodied the notion of ‘cool’ to a whole generation. It may be that he did not have the power of a Brando, or the vulnerability of a Clift, and he never allowed himself to take the industry he worked in too seriously, and was as a consequence was not taken seriously himself, but his undoubted screen presence and charisma made him a bona fide and quintessential French movie star. He passed away in Paris in September of 2021 at the grand old age of 88.