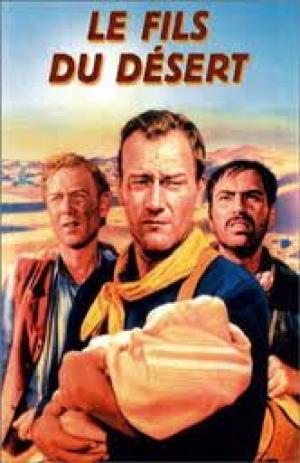 Ford goes back to the future

John Ford started his career in Hollywood in 1914 as a general gofer on low budget Universal westerns before accidentally stumbling into a directing job. After graduating to a serious career and becoming one of the industry icons, with successes in many different genres, (including 3 Best Director Oscars) he returned to the western form for most of the last part of his career. "I'm John Ford. and I direct westerns", was his throwaway line at a famous 1950 Directors Guild meeting, designed to get a laugh at a tense point in proceedings, which it did, but it also underscored his enduring affection for the most American of art forms. Oddly, at the time of that meeting, Ford had made few westerns in the last 20 years, but after it, the majority of his output was full of cowboys, Indians and horses covered in desert dust.

In 1948, as if drawing a circle around his career, Ford chose to re-make an earlier film of his, 1919's 'Marked Man', that had starred Harry Carey, a renowned silent film actor. Ford dedicated this re-make to Carey, who had recently died, and put his son Harry Carey Jnr into one of the lead roles, that of the Abilene Kid. John Wayne took the lead as Robert Hightower, a bank robber, and Ford called upon his regular stock company players to fill the other roles and to give voice to the Frank S. Nugent script. The script and story was rife with Biblical overtones, but the heart of the piece is one man's redemption via an unexpected and surprising device.

Three not-so-bad men, ride into Welcome, a small town in Arizona to rob the bank. On the way to the bank, they stop and share coffee with Perley (Ward Bond) and his wife, before discovering that he's the town Sheriff. They hit the bank and Perley forms a posse to track them down. Cut off from a water supply, and forced into the desert without water they make for the well at Terrapin Tanks only to discover it's been rendered useless by the ill judged use of dynamite. They find a fatally ill woman there alone, deserted by her 'tenderfoot' husband about to give birth, and with her dying request, she asks the three men to be her son's godfathers. They take charge of the infant and attempt to stay ahead of the pursuing lawmen, as they set off across the western wasteland.

John Ford's mastery of the form was never more evident than with this trim, beautiful and allegorical western. The framing is Ford at his most magnificent, as he utilised the deserts of Death Valley and the wilderness of the vast expanses of the south west to stunning effect. Ford was in financial difficulty at the time he made '3 Godfathers', his Argosy Pictures struggling to stay afloat after the failure of the turgid Henry Fonda vehicle 'The Fugitive', so finding himself commercially lucrative projects was imperative. Ford fell back on familiar ground, confident he could turn the precarious situation around, and turned out two impressive colour films, the first of his 'Cavalry' trilogy, 'Fort Apache', with John Wayne and Fonda, and then this Frank S. Nugent scripted tale. Ford teamed up with noted cinematographer Winton Hoch for the first time on '3 Godfathers', a man who had himself helped develop the technicolour process and who never made a film in black and white. Ford and Hoch created a glorious, subtle colour palette for the film, and Hoch soon went on to win the Academy Award for his work on Ford's wonderful, 'The Quiet Man' in 1952.

Ford, possibly due to his war time experiences, was much more overtly showing his religiosity during this period of his work, as witnessed by 'The Fugitive', his misguided attempt to render a degree of 'spirituality' on screen. That film being an adaptation of a Graeme Greene novel, 'The Power and The Glory', about the struggle of a priest against a totalitarian regime, but it's catholic mysticism fell mysteriously flat in Ford's hands. He was on much surer ground with the 'Godfathers' allegory, and even though the baby Jesus/three wise men parallels are laid on, it's never to the point of the detriment of the film. The device works because the humanity Ford manages to convey is universal, and wider than a narrow Christian centric reading of the tale. The power of the image of John Wayne bringing the baby into the saloon towards the end of the film, before the piano player starts up 'Silent Night' to a hushed room is undeniable.

Ford's curious mix of bluster and sentiment never worked better than in the context of the 'good' bad man, trying to find redemption in a hostile environment. In John Wayne, Ford found one of his key muses, and with '3 Godfathers', following closely on the heels of 'Fort Apache' they moved into the most fertile period of their long and fruitful collaboration, one that would culminate with the remarkable 'The Searchers' in 1956. Wayne embodies Hightower, and his charm and grace add enormously to the success of the film, as does the rough edge of his Mexican partner Pedro (Pedro Armendáriz) and the low key boyishness of Carey's Abilene Kid. All three leads deliver fine performances, but Wayne does one of his best jobs for Ford, in a role that allowed him to reach further as an actor than many of his previous 'Pappy' parts.

Also along for the ride was Ford's favourite whipping boy, Ward Bond, reactionary, archconservative and scourge of Hollywood leftists. As if Ford's behaviour was not contradictory enough in his personal life, where his appalling record as a family man posed no impediment to his championing of family values on screen, his political life was equally messy.  At approximately the same time as he was standing up for the liberal side of the Directors Guild argument against Cecil B. DeMille and his right wing stooges, he was also a member of the right wing MPA, or Motion Picture Alliance for the Preservation of American Values. This Commie hating, blacklist cheerleading organisation had Ward Bond as a key member and it's President around that time was John Wayne. The MPA, who's 'prestige' was enhanced by having Ford on it's committee had proudly kept lists of 'suspect' Hollywood figures and even handed them over to the FBI.

John Ford was a paradox, a tyrant and a poet, supremely confident and terribly insecure. He bluffed his way through many situations by bullying and harassment, and occasionally was called on his behaviour by the likes of Henry Fonda and Robert Montgomery. Ford has a crisis of confidence during the making of the film 'Pinky', for his good friend Zanuck at Fox, the production that followed '3 Godfathers', and walked away during the first weeks filming claiming illness. It's widely accepted that Ford stood down for Elia Kazan in order to save himself the embarrassment of providing a poor film on a 'liberal' subject for which he was not suited. The Ford of 'The Grapes of Wrath' era might have made the film work, but his lurch to conservatism post WWII seemed to find him needing to retreat to uncontroversial subjects that would include some crass, unsophisticated military hagiographies.

Ford's reputation as a directing legend is the result of a body of fine films, and no less than Ingmar Bergman called him the greatest of all, and it's the touches in '3 Godfathers' that affirm this. A beautiful example is Ford being able to resist the urge to show his star in a close up facial, as might have been expected, in reacting to the suicide of Pedro. Rather Ford opts for long shot, and from behind, rather than directing us to the obvious. It's a powerful and subtle moment, only available to an artist confident in his choices of avoiding overtly milking the event. Ford's admiral taste and restraint is directly seen to have influenced Bergman in the seminal, 'The Virgin Spring', where the father's pain at the death of his daughter is shown in long shot.

John Ford made many great films, and many of them happened to be westerns. After '3 Godfathers' he made a couple of the greatest of them all, in 'The Searc=hers' and 'The Man Who Shot Liberty Valance'. Ford even had the late career balls to re-assess his and Hollywood's treatment of the Indians well before revisionist westerns became de rigueur. '3 Godfathers' is a beautiful and elegant western, made with great love for the form and for the people and culture it explored. It's also a wonderful entertainment. Who could ask for more? 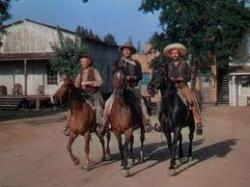 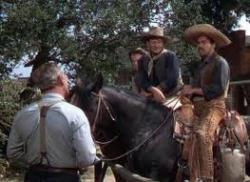 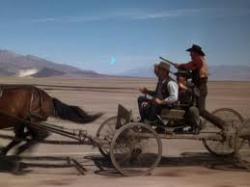 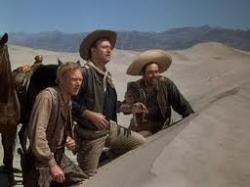 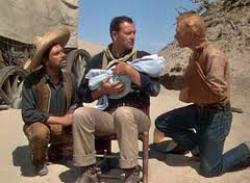 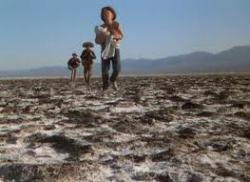 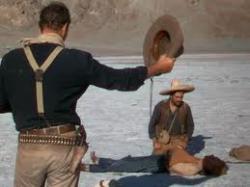