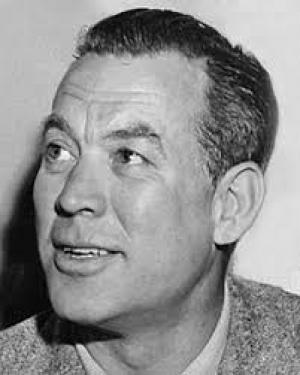 A strong case could be mounted that Wardell Bond was the luckiest actor to have ever worked in motion pictures. As a young athlete he fell into the work after John Wayne invited him to pad out a football film, Salute, for the great John Ford in the late 1929. Wayne and Bond subsequently became lifelong friends. Ford saw something in Wayne that kept the good looking, athletic extra stay in the game until he graduated to full-fledged star, then superstar, and his buddy Ward Bond was seemingly at his shoulder at every step of the way. Bond appeared with Wayne in no less than 23 films, of the startling 200 or so features that Bond appeared in. There's not much point in exploring his artistry beyond marking the great films he appeared in, but his naturalism and ability to play to type let him cobble together a roster of films the envy of every supporting actor.

Bond capitilised on his good luck by playing up to his mostly big bear, everyman persona, the guy-behind-the-main guy character or at least the best friend. In this field Bond found a rich trove of supporting roles and rarely rose to find a suitable starring vehicle, but along the way he provided memorable support roles in many of the finest films of Hollywood’s Golden Era. He cultivated great relationships with A-list directors like John Ford, Howard Hawks, Raoul Walsh and Frank Capra and mostly as a result appeared in more films in the American Top 100 as curated by the AFI. He also appeared in 13 films that were nominated for Best Picture Oscars.

Bond’s stock figure was generally a good, stolid if sometimes oafish character, sometimes the heavy, but his kindly face was mostly employed in good guy roles. His face however belied the fact that beneath his nice uncle façade there was a vicious streak and a bigot’s heart. He was an early and virulent anti-communist and, in 1944, was a founding member of the quasi-fascist Motion Picture Alliance for the Preservation of the American Ideal, whatever that meant. Bond covertly spied for the FBI and informed on many of his co-workers if he thought them suspect. His reputation and authority behind the scenes led to the disgusting reality of fellow actors having to debase themselves to him in order to continue working. He gave a ‘pass’ to Anthony Quinn and even John Huston, amongst others.

It seems plausible that John Ford was given a ‘secret’ pass by Bond (but he was also big enough to maybe not be touched too heavily by the Blacklist) but it otherwise makes no sense that the director of the arch-leftist masterpiece The Grapes of Wrath, should emerge unscathed from the witch-hunt. Frank Capra was grey-listed at least, and it’s possible Bond intervened to let his old friend off the hook too, as Capra helmed several liberal masterpieces in the 1930’s, mostly written by Robert Riskin. Ironically, one of Bond’s best roles came courtesy of Dalton Trumbo, who Bond was happy to see sent to prison as one of the Hollywood Ten.

Ward Bond's screen presence was an ornament to many great films, but as a man he was not above ratting on his co-workers, not above bullying and slandering anyone who got in the way of his idea of what an American should be. He was a rabid anti-leftist and anti-Semite as well, a disgraceful and deeply flawed human who should not be mixed up with the characters he pretended to be on film. He died in 1960, a time when the blacklist was starting to be broken by Kirk Douglas and Otto Preminger both giving Dalton Trumbo writing credits, and by then Bond had attained TV stardom in Wagon Train. John Wayne read the eulogy at the funeral and Bond bequeathed Duke the shotgun that Wayne had used to accidentally shoot him years before. Enjoy his work as a screen artist of course, but be amazed that such a loveable rogue on screen could be such a prick off it.