Jean-Luc Godard's 1963 film about the movie business now looks as much hommage to Godard as it does hommage to the movies, but that ain't necessarily a bad thing. In the middle of a furiously fertile period, which looks positively mainstream by comparison to his later output, Godard gets in all his post modernist licks, ironies and cinematic tricks, but gives the story heart by making it about the ineffable, imponderable and ultimately unknowable gap between men and women. In an era of many international co-productions, most of which were the cinematic equivalent of a dog's breakfast, Godard was persuaded to develop an Italian-American project and he initially conceived of Kim Novak and Frank Sinatra in the central roles. Collaborating with the genius of composer Georges Delarue, a romanticist of the first order and not a name one would normally associate with Godard, the powerful and haunting score is a central part of Godard's commentary on the manipulative power of movies, and the lyrical main theme is used both ironically and conventionally. Godard  also used his usual cinematographer Raoul Coutard who took his use of colour to new extremes than those of their previous colour film together, Une Femme Est une Femme.

Godard opens with a blast of coloured, self referencing voiced titles that give way to a camera crew (his own) pushing it's way through a tracking shot at Italy's famed, but run down, Cinecittà Studios. The credits are intoned vocally, and we are also treated to a quote incorrectly attributed to André Bazin, co-founder of influential magazine Cahiers du Cinéma, "Cinema substitutes for our gaze a world more in harmony with our desires".  Godard then runs a sequence where Camille (Brigittte Bardot) is lying naked on a bed, and the male lead Paul (Michel Piccoli) is taking inventory of her body parts, declaring his love for each! Godard runs this with various filters changing the colour scheme, red to white and then blue, a French patriot's colour scheme, the last refuge of the scoundrel? The scene was an afterthought as the producers were aghast at the fact Godard had managed to make a film with the most glamorous, notorious starlet in the world, one whose name was synonymous with sex, and not have any nude scenes. That those producers were surprised was a shock to Godard, "Have they not seen any of my pictures"?  was his retort, before compromising just a little by adding on his own idiosyncratic and ironic take on a Bardot nude scene.

Paul goes to see an American producer, Jerry (Jack Palance) and takes a job doing re-writes on a Fritz Lang version of The Odyssey. jerry is an obnoxious pig, ramming through his inarticulate ideas about what the film should be, as an un-amused Lang (playing himself) goes through the motions of dealing with an idiot producer, as he must have done many times in real life, "Include me out, as a real producer once said",  is his reply to an invite from Jerry. Jerry has heard Paul has a beautiful wife, and when Camille joins them Jerry starts to flirt with her. Paul's action in subconsciously 'pimping' Camille to Jerry, at least in her mind, causes the friction between the married couple  that dominates the rest of the proceedings. In an incredible sequence that plays out seamlessly across half and hour of screen time, Godard has the couple go through the minutiae of an evening's doings in their apartment, while the issues boil to the surface, having the fluid camera track the spiral of descent and contempt for each other they are falling into. Paul goes off to the location of the film shoot in Capri, Camille tags along, knowing that Jerry will try to engage her in an affair, and wanting to see what Paul will do about it. The stand off will be that Paul will do nothing if he thinks Camille has lost her love for him.

Godard, for the first and last time, succumbed to the lure of a big budget and a 'name' star, and it's constraints forced him into making the most 'mainstream' film of his career. Fellini covered some of the same territory with the slightly earlier, 8 1/2   and that film is visually referenced with Paul's attire in the bathroom scene. Fellini had longer to ponder the constrictions of a commercial film industry than Godard, and his film was about a crisis of artistic confidence, but the two films share an aesthetic view of movie making, where they love the idea of the 'movie', but hate the machinery that is necessary to create it. Godard has Lang wax lyrical about his philosophie du cinema,  and generally pours scorn on the industry he was working in, pointing up, amongst other things, the absurdity of handing a re-write of Homer to a writer of detective fiction. The glimpses of the film Lang is shooting look pretentious and dull, and border on a travelogue montage, possibly indicating that even guys like Jerry sometimes have a point? Godard's bag of subversive, deconstructionist tricks could only take him so far with this piece, and he wisely focuses on the conflict between the couple to give the film it's centre.

Godard returned to the notion of deflated expectations in relationships in many of his features, i.e the idea that one partner expects the other to act a certain way, and when they don't they reassess their own expectations. Paul expects Camille to 'play the game', to be a dutiful wife, absorb the sexual flirtations that come with being an attractive woman in a superficial industry and carry on, in the knowledge he loves her. Camille feels no self respecting husband would put his wife in the position of having to play these games, and maybe she needs to find a husband who is strong enough to not act this way, hence the alpha male cartoon that Jerry is appears to be a reasonable option. Godard has Palance, who hated everything about the film apparently, chew up the screen so much he presages the cartoon turn from Belmondo in Pierre Le Fou  a couple of years later, where the cartoon metaphor is take to it's obvious Wile E. Coyote conclusion. "We must rebel when we are trapped by circumstance"  says Camille, as she grows further apart from Paul.

Godard considered having Bardot play the entire film in a black wig, completely devaluing her public persona and commenting on the 'commoditisation' of women at the same time. He settled for using the wig in the long apartment sequence, which worked better in terms of balance and still allowed for the comment to stand. It also asked questions about identity, and these resonate throughout with both Paul and Camille realising that they are different people with each other in any given situation. Is the Paul in the bedroom the same Paul when he's in a room with Jerry? Is Camille another beautiful object like the statues in the film, the images in a book that Paul paws through, is she a real woman at all in a culture obsessed with the objectification of a woman like Bardot?

Jean-Luc Godard may have been a Picasso-esque character in the film world, albeit without the manic output for an entire career. If he started with a conventional canvas in Breathless,  with a few angular strokes, he moved towards an abstract expressionist phase that produced the 'cubist'  Pierre le Fou,  and culminated in the last of his 'mainstream' films, one finger on the counter culture pulse, and one finger in salute to modern media, Weekend,  in 1967. A startling progression, but then again in that same era The Beatles moved from Please Please Me to A Day in The Life within 4 years.... maybe there was something in the water? Godard would explore the space between couples in several more of his '60's films, but was never more probing than in this brilliant and challenging piece of essential cinema. 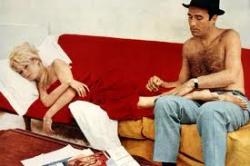 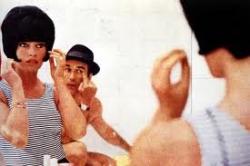