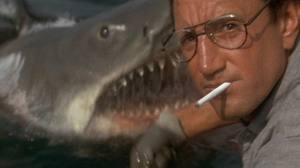 * Universal Studios continue to set a superb standard with the Blu-ray release of Jaws, full of fine added extras and compelling documentary footage of what is one of the definitive horror films of the modern era. It's a great excuse to catch up with films that remind us what great cinema means, to relive and enjoy the experience in brilliant high definition. As if we needed any excuse!

The hitherto precocious Stephen Spielberg broke through to the mega mainstream, and almost invented the modern blockbuster phenomenon with his fiercely well made 1975 classic, Jaws. The Peter Benchley bestseller proved difficult source material because of the technical challenges the shoot presented in a pre CGI world, but Spielberg managed to make a tense and colourful romp that kept people out of the water for many years. Universal were keen to back Spielberg’s talent, the young director shown to be both capable and keenly commercial with his debut Duel, and the entertaining and under-rated The Sugarland Express. The production team of Zanuck and Brown convinced Spielberg to sign on to the project, and Stephen himself wrote a first draft screenplay, before opting for Benchley to adapt his own novel. Unhappy with either, Spielberg had several writers do 'polish' jobs on the script, and eventually had his friend and comedian Carl Gottlieb contribute significantly to the final version.

A group of young people are having a night party on a beach, before a couple run off to skinny dip. The girl runs away from her would be paramour and makes it into the water, but the boy is too drunk to function, passing out on the beach as a predator of an entirely different kind then pursues his quarry. Police Chief Brody (Roy Schieder), troubled by the grizzly discovery of the bloodied remains of the girl on the beach, suspects a shark attack. The local medico initially agrees but under pressure from the Mayor (Murray Hamilton), who is worried about the potential damage a shark scare would do to the upcoming tourist season, changes his mind, causing Brody to reconsider. Nagging doubts remain however, as Brody watches his young son come under attack in the harbour, and another young life is lost. The locals ineptly attempt to take the shark, but it soon appears only a professional fisherman is up to the task, and Quint (Robert Shaw) is employed. Brody accompanies Quint on his boat, 'Orca', and the pair are joined by marine scientist Hooper (Richard Dreyfuss) as they do battle with the ferocious killing machine.

Spielberg admittedly saw parallels between the relentless predator of Duel, and that of the shark, where both potential victims of each represented ‘everyman’ types. Unwittingly or not, he also constructed a Hawksian set-up, a group of ‘professionals’, eschewing the help of ‘amateurs’ and doing the communities dirty work. In this analogy Quint is the John Wayne character in Rio’s Bravo, Lobo or El Dorado, and Brody and Hopper are the conflicted help, each battling a personal demon and wondering if they are 'good enough'. Brody is an outsider in Amity, and even though he’s been there for years he’ll never be accepted as a local, and so is constantly needing to prove himself. Alas, in trying to be like a local, he’s also made a miscalculation by averring to the wishes of the slippery Mayor, a decision that led to the death of a young boy and Brody is therefore doubly keen to redeem himself. Hopper is the runt of the litter, laughed at as a boy and made to feel inadequate by the school jocks; he’s out to prove himself a competent expert in identifying and mitigating the shark threat. Both men tag along with Quint, the grizzled veteran, and in true Hawks-ian style bond over their shared experiences as they face down the danger. Spielberg heightened this Hawks like scenario by expurgating the affair between Hooper and Brody's wife, which occurs in the novel, thus emphasising the males-under-pressure aspect of the story and eschewing melodrama.

Life is a continuing story of finding one's place in the hierarchical pecking order that is human society. Spielberg's strength is his ability to distil his films down to this very human truth; it's also his greatest weakness when he tips the balance with sentiment and emotional manipulation, but thankfully in Jaws he manages to avoid this. Quint's tragedy is he can never belong to the society he craves approbation and acceptance from, and all he can do is prove himself by his actions. Quint is as much an outsider as the shark, and not surprisingly, it's the thing he identifies most with, his contempt for the local bureaucracy evident, "there's too many captains on this island". Brody, by contrast, has done everything 'by the book', he's a pillar of the community, is raising his family in Amity and yet, he is not 'one of them', only by killing the monster can he be accepted. Brody aligns himself with another outsider in Hooper, against the wishes of the town fathers, and trusts his instincts as a 'professional', instead of the moneyed interests of the commercial business owners. Hooper represents man's attempt to control nature, science versus our animal heritage, as he pits his mind against the "miracle of evolution", the Great White. Quints reminisces about a wartime incident, where he came face to nose with predator sharks after his boat was sunk, and sends chills down the spine as he tells of their vacant 'doll's eyes'. Hooper's science represents the future, a place where we can tame our animal legacy, and carve out a life unencumbered by the threat from this pre-historic throwback. Ironically, Quint is just as much a throwback and his Ahab like obsession with the shark can only end in the destruction of one or the other.

The shoot was long and problematic, running more than 100 days over and causing Spielberg to believe he'd never be trusted with a feature film again. The mechanical shark, wittily nicknamed 'Bruce' after Spielberg's lawyer, was unreliable and caused many anxious moments. Spielberg wisely focused on the threat of the shark, creating more Hitchcock-ian psychological terror in the process, and in true Val Lewton style he held back the reveal for as long as possible. Universal knew it had a winner on it's hands and taking a lead from the marketing of Friedkin's The Exorcist it opened the film simultaneously in 'wide release' in over 450 theatres at once, rather than the staggered, regional opening strategy common at the time. The move paid off handsomely and Jaws became a phenomenon, setting in train the inexorable trend towards 'blockbuster' summer movies. Star Wars consolidated the strategy and the cinema world has had to endure the 'dumbing down' of mainstream movies ever since, the studios playing to the dominant demographic of summer moviegoer's, the teenager.

Spielberg's casting instincts proved solid, the excellent Robert Shaw recommended by Zanuck and Brown after his recent work for them on The Sting, even though Lee Marvin had been offered the part, but preferred the real fishing of big game to a filmic recreation. Spielberg didn't want an A-list name for Brody, and chose the reliable Schieder, not quite a star but with real presence and depth and Dreyfuss round odd the odd trio, recommended by Spielberg's friend George Lucas who'd used him in the fine American Grafitti.  John Williams provided the seminal musical hook, simple and effective, and in the same way the dissonant high strings of Herrmann's Psycho became forever associated with imminent danger, so too the low cello semi-tone move from E to F. Underwater footage from Australian couple Ron and Valerie Taylor added greatly to the reality Spielberg was able to conjure, including a frenzied attack on an empty shark cage. Western Australia remains the shark attack capital of the world sadly, with several deaths and injuries in the last few years alone.

Spielberg's career never looked back, and Jaws contained many tropes that would be associated with future Spielberg productions, i.e. flair and wit, seen in the early Indiana Jones films, and man v ancient predator, a theme revamped in his dinosaur themed Jurassic Park series. Stephen Spielberg is in many ways the Cecil B. DeMille of his time, an entertainer with some pretensions to greatness, but his flaws hold him back from true cinematic immortality in any way other than commercial success. He's made several brilliant and compelling pieces, and occasionally he's made a film to live happily in the first rank of productions, like Close Encounters of the Third Kind, Schindler's List or Empire of the Sun, but too often takes the soft option of cloying sentiment as in The Colour Purple or War Horse. Films that are strong in many areas become weakened by a miscalculated playing to emotions, holding back worthy films like Saving Private Ryan and A.I from being satisfactory on every level. Jaws is a fine and well crafted horror film, wittily recalling camp '50's classics like The Creature From The Black Lagoon, but also playing on an ancient and primal fear of man's. The human race came from water but we are out of our league in returning and facing the monsters of the deep and 'Jaws' reminds us of this in a visceral and entertaining way. Durh Duh. 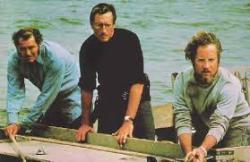 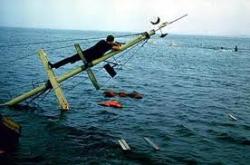