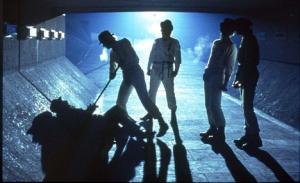 In the early ’70’s Stanley Kubrick decides he has to make a ‘youth’ movie for the ‘Easy Rider’ generation to prove his credentials to his studio about delivering a low budget and effective movie that captures the zeitgeist and speaks to the times. Simple enough? then he perversely picks a novel set in a dystopian future, written 10 years earlier and with it’s own invented language to boot! No sense in making it easy Stanley.

The source novel by Anthony Burgess was his attempt to address gang violence, a simmering issue in late ‘50s England, and more specifically the violent assault of his first wife at the hands of a gang of American soldiers during WWII. On the back of the juvenile delinquent fears of post war America, England saw the rise of Mods and Rockers and the riots and brawling that accompanied the flexing of societal muscle by this new youth under-class unhappy with the status quo and the privations of a moribund culture. Burgess coined a ’slang’ argot for his gangs of Droogs known as Nadsat, mostly nonsense faux-Russian, but once heard in context one that the syntax and meaning of which is easy enough to discern. Kubrick uses quite a bit of Nadsat in the film, even though most people thought it would be un-filmable, but the fact is accompanying visuals made it even easier to interpret. Once Kubrick had settled on a script, rejecting Burgess’ attempt in favour of his own, he needed a leading man with massive charisma who could carry off the difficult performance of a character who was part child, part thug, after seeing Malcolm McDowell in Anderon’s wonderful and anarchic ‘If….’, he found his Alex.

The film opens with a memorable shot of Alex at his favourite ‘milk bar’, where he and his gang are enjoyig their drug of choice before indulging in a night of ‘the old ultra violence’. The camera pulls back from a close up on his face, both malevolent and bored, one eye with a striking false eyelash, as he toasts the viewer, McDowell admitting his improvised move was to indicate ’you’re in for one hell of a ride’. He was right. In a cacophany of color and light, the milkbar is a brilliant futuristic vision of the anodyne and the unsettling. The sculpted tables of female forms, prone is all kinds of sexually suggestive postions, visually indicates that women in this society are for the use of the Droogs who will pour drugged milk from their mechanical nipples. The tables used in the film were based on artist Allen Jones tables first exhibited in 1969. The Droogs head off like a bizarro West Side Story gang, and encounter a drunk near a river bank. The drunk knows he’s in for a beating and laments the end of ‘law and order’, the gang kicks into him mercilessly. They move on to a spat with a rival gang, all scored to classical music. Alex’s voice-over indicates his love of Ludwig Van, especially the Ninth Symphony. Still fueled up and in need for more thrills Kubrick puts them inside a very fake and very fast car on English country lanes, looking for all the world like the Keystone Kops on amphetamines, before stopping at a destination called ‘home’, to carry out the event that would cause the most controversy, the home invasion and rape in the writer’s house.

Sparking off a storm of criticism was the carefully staged and literally ‘choreographed’ rape scene where Kubrick and Burgess play upon suburbia’s darkest fear, the violent intruder into the ‘castle’ that is the family home. Alex and the Droogs trick the lady of the house into letting them in, they pour through the gap like stormtroopers, disguised with comic noses that threaten like a theatrical phallus as they lay waste to the temple of culture that is the writer’s home. Burgess must have put himself in the frame for this scene as the helpless writer forced to watch his wife being brutally humiliated and degraded. What most shocked audiences and critics at the time was the dark humour that undercut such a confronting scene, it forced the audience into a kind of smiling complicity and in some minds seems to have negated the horrific nature of the act we witness? This is to miss the point of Kubrick’s staged satire, to smile when the doorbell plays the opening 4 notes of Beethoven’s Fifth, to marvel at the mix of black humour that links the joyful ‘Singin’ In The Rain’ with the act of kicking and beating a helpless man is not to condone the act. Alex, in his twisted sick way, is having as good a time as the dancing Gene Kelly was on that Hollywood dream street, it’s HIS idea of fun, not ours. To smile at that outrageous link is not to downplay the serious nature of rape, it’s to indicate the mental state of a psychopath. Kubrick puts on screen the systematic rape of art and ‘high’ culture by the destruction and violence in the writer’s home, satirical and stylised as it is, it’s still a thoughtful critique.

Alex continues on his mindless path, until his Droogs start to take exception to his leadership style and try to stage a coup. Alex nips it in the bud and then leads them on another assault on another woman’s art and, in this case, kitten packed house. This home invasion is not so smooth, and Kubrick makes some feminist era points with this scene as the strong willed and feisty ‘cat’ lady fights back. The walls are adorned with images of sexualised female bodies, open and inviting, and Kubrick places into Alex;s hands an enormous plaster phallus that the woman uses for a chair!  Alex and the woman conduct a kind of ‘dance of the penis’ before again the black comedy ends with Alex murdering the woman with the plaster object d’art. The police arrive as Alex is escaping, but his Droogs blind him in an act of betrayal and Alex is captured.

The next phase of the film involves Alex in prison and his attempts to adapt to his new circumstances. A priest attempts to help Alex, who ironically has visions of himself as one of the Roman centurions whipping Jesus Christ, and soon Alex is putting himself forward to undergo a radical new treatment that could cut his prison time. The government is intent on trying a therapy that involves showing the criminal subject a series of visual images and films and when he reacts inappropriately he gets a shock. The nightmarish contraption that makes the scene even more disturbing is the ‘eyes wired open’ aversion apparatus, denying Alex the ability to close his eyes, and one of the most memorable images in all of cinema. The scene was so intense and extreme that McDowell tried to pull away in a fit of anger at Kubricks methods and scratched his cornea. Art is pain. McDowell nearly drowned when the breathing apparatus failed during a scene where, in time honoured fashioned, his ex-gang members are now police oficers. Alex endures the ‘cure’ the Ludivico Treatment portends to offer and is released back into society. Alex finds he is now ill-equipped to live in the world he once plundered like a Viking, his ‘conditioning’ means he cannot retaliate to any violence promulgated against him. His parents have a ‘replacement’ son in their house, and even the old drunk gets a chance to help deliver a ‘bit of the old ultra violence’ back to Alex with his whiskey soaked comrades, in a geriatric mirroring of Alex’s Droogs. Alex re-visits ‘home’ and the writer is able to exact his revenge. Justice is seemingly done, Alex is hospitalised but the treatment becomes a political football and the Minister visits Alex to get some press shots to smooth over the scandal. Burgess manages to indicate the moral equivalence of the solution by having the Priest complain that as Alex's choice to reject violence has been taken away, the cure itself is immoral. A curious point from one who advocates a celestial fascism rather than an earthly one. Crucially Kubrick rejected the British book ending where Alex is indeed cured, but finishes with an American version ending where it’s plain Alex has regressed, indicated by an ironic Alex saying ‘I was cured alright’, this was to a decision that doomed the film when it came to the firestorm of controversy that erupted after it’s release.

The achievement by Kubrick remains, despite the myth surrounding the notoriety of the film, that he meticulously crafted a visual tour de force, seamlessly integrating bold futuristic designs with elements of an architectural past that coalesced into a coherent whole. The performances are robust and suitably theatrical in the support roles, Kubrick reminding us often of the inbuilt theatre in the piece, both in the proscenium arch that presaged the brawl with the rival gang, and in the staging of Alex’s ‘cure’ presentation as a set of scenario’s involving actors taking their bows at the end. McDowell pulled off one of the great central roles in modern cinema in his Alex DeLarge and as Kubrick said 'without Malcolm there would have been no film', as he created a character so dimensional that both childlike glee and capricious malevolence are present in every frame.

The times dictated that ‘A Clockwork Orange’ would be pilloried by the conservative press, who linked it to many acts of youth violence that then seemed on the increase in Britain. The consequences were sheeted home to Kubrick’s front door when he started to get threats against his family. he drew the line and, because he had immense control in his new Warner Brothers contract, he had the film withdrawn from distribution in Britain, a state that lasted until after his death. 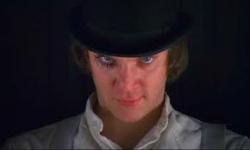 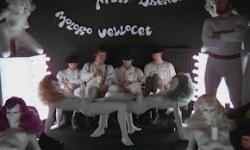 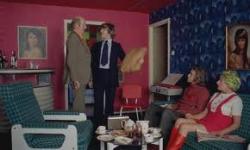 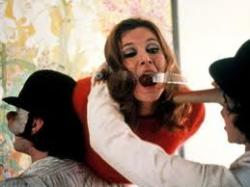 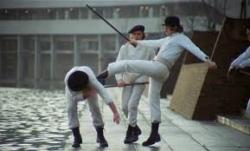 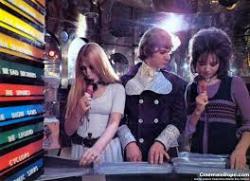 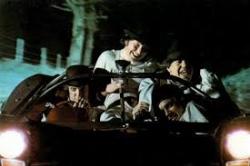