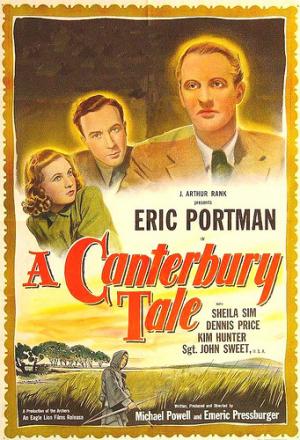 "I came into films with no patronage, no money, nothing. Just the love of the art." ~ Michael Powell

The Archers regarded A Canterbury Tale as their first failure, in Powell’s words they ‘came a cropper’, but from this distance that assessment seems overly harsh as this is a piece of cinema that rewards persistence. It could have done with a David Lean editing job possibly, some of the business with the children helping solve the central mystery seems overdone and superfluous, but at its core the film has all the trademark ‘ordinary strangeness’, and then some, that we’ve come to know and love in the Powell and Pressburger features. The setting was the countryside of Powell’s childhood, himself a ‘man of Kent’, and his judgement may have been slightly impaired in the realising of something so close to him, but only slightly as it’s his love of the ‘Englishness’ of people and place that ultimately redeems the film. The project was also compromised by the political need to show American isolationists what they were supporting in Britain now that Japan had dragged them into the conflict, a British people who valued freedom as much as they did, in fact it was partly a history lesson to show the Yanks where they got their value system from.

Taking as a reference point Chaucer’s English classic Canterbury Tales, P&P centre their story on 3 modern day 'pilgrims’ who take the old road to Canterbury and who each in return receive a ‘blessing’ for making the journey. Powell takes us from medieval travellers to modern day in a jump cut that pre-dates Kubrick’s bone-to-spacecraft by 25 years as we see a Baron’s hawk in flight turn into a spitfire plane in war time England. A Train disgorges passengers at Chillingbourne, the stop before Canterbury, and 3 of them set off for the centre of town, Alison (Sheila Sim) down from London to do farm work, and 2 soldiers Bob (John Sweet) an American who’s effectively lost and a Brit, Pete (Dennis Price). Alison is attacked by the mysterious ‘glueman’ who pours glue into the hair of woman who accompany soldiers at night. The three determine to solve the local mystery of the assailant’s identity and work together to do so. Suspicion falls onto a local magistrate Colpeper (Eric Portman) who dismisses Alison when he first meets her with a thinly veiled streak of misogyny. Bob learns more about English foibles as he talks to the locals but strikes up a conversation with a local woodcutter and finds the same instructions his father gave him in Oregon are in use in Kent.

Colpeper lectures captive audiences of soldiers who are stationed nearby in the history of the area, a passion of his, as he is convinced that only by knowing your past can you know your own identity. Alsion and Bob reveal to each other personal losses they’ve experienced, Alison has a fiance pilot who’s been shot down and not heard from, and Bob has not had a letter from his sweetheart for several month’s. The 3 sleuths use different methods of investigation, Alison interviews all the girls who were victims, Bob enlists the help of the local boys who are normally playing war games, and Pete goes straight to his main suspect Colpeper and gathers crucial evidence. Colpeper finds out from Pete that he’s an accomplished organist but has to find work as a theatre organist instead of his ambition of playing in a large cathedral. Eventually the 3 collate their material and determine it is indeed Colpeper who is the ‘glueman’ but are at a loss as to his motives. On a train to Canterbury they confront him with their findings and he reveals the motivation behind his attacks. They all arrive in Canterbury and Pete decides not to report Colpeper to the police, finding his ‘blessing’ in the form of being allowed to play the great organ in Canterbury Cathedral for a farewell service for the troops. Alison is given news that her fiance has been found alive and Bob is given letters that arrived late because his girl is now a WAC in Australia.

P&P bring the story together grandly, some of their most effective resolutions occur in this film, the eccentric Colpeper reconciling an earlier quote on a plaque ‘what has been has been and I have had my hour’. Colpeper’s obsessive pride in the history of the area and his missionary zeal in sharing it are shown to be a justifiable eccentricity, at one point Copleper springs from the land itself when Alison stumbles upon him in a field. Ultimately he still has to incorporate progress into his cloistered view, and Powell shows how even ancient cities will reinvent themselves, even if this time much of the change is brought about by the human folly of war. Pete, the modern and cynical city man sees that there are many different voices that sing in the English choir and that a countryside harmony is a sweet and valuable one to have. Bob sees that these whacky Brits with their tea and upside down Sergeant stripes are the cloth from which the Yanks are cut, his parochial worldview also expanded by his experience. Alison learns from Colpeper to be open to miracles, and they find common ground literally, ‘you have to dig to find out about people as well as history’ and finds her ‘miracle’ in the return of her lost love,

The performances are a mixed lot, Portman is very good as the eccentric magistrate and Price hints of the acting glories to come. Sheila Sim is okay as Alison but is lightweight as is John Sweet, a non-actor who’s manner and voice somehow charmed Powell. One wonders what Burgess Meredith would have made of the part as he was originally cast. The Archers filmed new bookends for the American market with Kim Hunter, after she’d done A Matter Of Life And Death for them, as Bob’s WAC girl meeting him after the war as he explains his time in Kent, but they add nothing essential and the UK cut remains the only one to view. The joys it holds are still many, the slightly askew reality they present has some of the semi-surreal tropes that they would expand upon in later films. Not quite a bulls-eye but fascinating near miss. 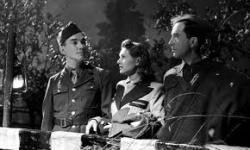 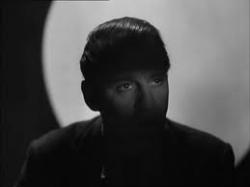 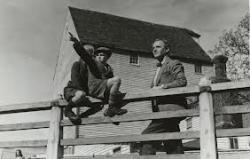 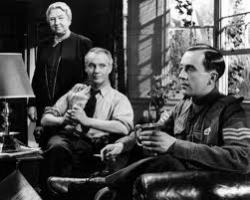 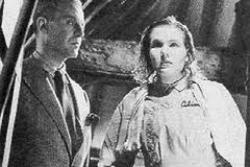 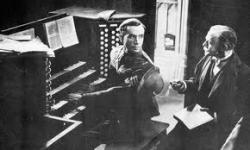