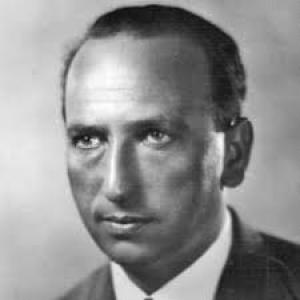 'So many times I have a speech ready, but no dice. Always the bridesmaid, never the mother.'
~ Michael Curtiz

If the career of Hungarian Michael Curtiz ended at the end of the silent era, he would be a significant figure in world cinema, having directed some 64 odd films by that stage, but virtually none of those films are what he’s known for today. Born Manó Kaminer in 1886, he began in the theatre as a boy and was already stablished as a theatre director when he made the first Hungarian feature film in 1912. He went on to direct films in Austria and Denmark before Hollywood came calling in the form of Harry Warner in 1925, and he accepted an offer to go to California and work in the Dream Factory. Curtiz worked almost exclusively for Warner Brothers for the next 28 years and in doing so helmed some of their best and most famous films and became notorious for his mangling of the English language.

Having no English and being thrown completely into the deep end, Curtiz soon learned to swim with the Hollywood sharks, in an environment where success was almost exclusively measured by box office receipts. He was assigned a series of Dolores Costello films, (the wife of actor John Barrymore and grandmother of Drew Barrymore) and soon had done well enough to be given an Al Jolson sound film, Mammy in 1930. He worked with Frank Fay (Barbara Stanwyck’s then husband – their relationship said to have inspired the original A Star Is Born) and Joan Blondell in God’s Gift To Women, and with the great John Barrymore himself in The Mad Genius in 1931. Warner production chief Daryl F. Zanuck foisted a young Bette Davis upon Curtiz for Cabin In The Cotton, and a resentful Curtiz made her life a misery. She called him a ‘monster’ but went on to make 6 films with the mean natured Hungarian, including 20,000 Years In Sing Sing in the same year, co-starring with the young Spencer Tracy.

Curtiz worked at a furious pace, churning out any film that was he was assigned to in a number of genres, always doing deep research before starting filming. He was in a personal relationship at this time with French actress Lili Damita, who he’d directed in films in Hungary and who would play a pivotal role in introducing Curtiz to Errol Flynn in 1935. After churning out a series of detective stories or crime films, typical Warner fare for the period, usually using William Powell or James Cagney, Bette Davis or Kay Francis, Curtiz was given a big budget swashbuckler in an attempt by Warner Bros. to take on MGM in the area of depression era escapism. Captain Blood proved to be a blockbuster hit, and Curtiz took a chance on unknown leads, Errol Flynn and Olivia De Havilland, turning both into enduring movie stars and propelling him to the first ranks of Hollywood’s directing talents.

Curtiz proceeded to make twelve features with Flynn, most co-starring De Havilland, and together they were top box office fixtures for the next 7 years before falling out in spectacular fashion in a fist fight on set. Amongst the best efforts during that run were The Charge of The Light Brigade, The Private Lives of Elizabeth and Essex (with Bette Davis) and the immortal The Adventures of Robin Hood, with Claude Rains and Basil Rathbone. There were also three notable westerns, Dodge City, Virginia City and Santa Fe Trail, as well as the excellent swashbuckler The Sea Hawk. During this period, he also helmed the very fine Warner Bros. signature gangster films, Kid Galahad, with Edward G. Robinson, Bette Davis and Humphrey Bogart and Angles With Dirty Faces, featuring Cagney, Bogart and Pat O’Brien.

After his fight with Flynn in 1941, he turned 1942 into his own personal annus miraculum with two huge Cagney hits, Captain of The Clouds and Yankee Doodle Dandy, and capped it one of the greatest Hollywood films of all time, Casablanca, with Bogart and the new Swedish sensation, Ingrid Bergman. Michael Curtiz was recognised as Best Director, his only win from 4 nominations, and Warner Bros. walked away with Best Picture into the bargain. In all 6 of Curtiz’s films were nominated for Best Picture.

Now at the height of his powers and influence, Curtiz continued in the same vein and directed several more classic films through the decade, including the compelling Film Noir that resurrected the career of Joan Crawford, Mildred Pierce. An odd sidebar was that he was given the Soviet propaganda piece, Mission To Moscow in 1943 as Hollywood engaged in a series of films to support their war-time ally. These red chickens came home to roost when HUAC came calling later in the decade, but Curtiz emerged unscathed from the notorious hearings. A strong post-war run continued with Night and Day, a fanciful biopic about Cole Porter starring Cary Grant, Life With Father, a sweet slice of Americana that featured a Best Actor turn from William Powell against Irene Dunne, and a fine Noir with Joan Crawford and Zachary Scott called Flamingo Road.

In the late 40s Curtiz discovered Doris Day and worked with her several times, notably in Young Man With a Horn, a fine drama starring Kirk Douglas and Lauren Bacall. In the 1950s he worked with major stars in a succession of features, most very successful commercially, including Bright Leaf with Gary Cooper, Force of Arms with William Holden and Jim Thorpe – All American with Burt Lancaster. An artistic triumph in this phase was the brilliant Hemingway adaptation starring John Garfield, The Breaking Point. The decade also including a couple of Danny Thomas hits, I’ll See You In My Dreams, with Doris Day and a remake of the Warner chestnut The Jazz Singer. He worked with John Wayne and Donna Reed in the lightweight Trouble All The Way and finally left Warner Bros. for Fox to make a 50s big screen cliché, the Bible era sandals and sand epic, The Egyptian. He dabbled again in Americana with two films featuring Will Rogers Jnr, including The Will Rogers Story, and reunited with Bogart for the very good We’re No Angels, a Paramount comedy that included an uncredited Paul Newman.

He enjoyed a major success with the cheesy Bing Crosby vehicle White Christmas and made a tight late period Noir with The Scarlet Hour, featuring an almost unknown cast. Some late career highlights included the excellent The Helen Morgan Story, starring Ann Blyth and Paul Newman, and a solid western with Alan Ladd called The Proud Rebel, that also saw Curtiz reunite with Olivia De Havilland some twenty years on from Captain Blood. Hal Wallis, his producer with Casablanca, pressed Curtiz to direct an Elvis Presley vehicle, and Curtiz duly helmed the excellent Kid Creole, a film that confirmed Presley could act and be effective if Hollywood took him seriously, which it almost never did. The final decade saw most of his work done at Paramount, including a Robert Taylor western in The Hangman, and a final Noir with Alan Ladd called Man In The Net. He revisited Americana with a version of The Adventures of Huckleberry Finn, tried his hand at European melodrama with the Sophia Loren and Maurice Chevalier starring A Breath of Scandal, a religious ‘biopic’ Francis of Assisi and finished his career with a John Wayne western, The Comancheros.

Michael Curtiz finished his career and died the next year in 1962, just as the French sourced Auteur Theory was taking hold in film criticism and the Nouvelle Vague was enjoying its time in the sun. The Auteur Theory really had nowhere to slot a studio workhorse like Curtiz, who never enjoyed the critical acclaim that the likes of Howard Hawks and Nicholas Ray attracted. The art of Curtiz was subtle, in that he prepared assiduously, worked hard and appreciated that what he did was an art, unlike his contemporaries like John Ford who derided that notion. Curtiz simply fronted up as the most prepared person on set, knew what he wanted at every level from framing to set design, from performance to lighting and worked hard to get it, and worked in a jaw dropping array of genres with deft versatility. Like most of the European emigres he was a hard driven, difficult man, proving himself in a new country and foreign tongue no less, but one who took his chance and squeezed every last drop out of it. Irrespective of the fact he would never be the critics darling, Curtiz was responsible for directing a handful of the finest films the Hollywood Dream Factory produced, which is something most of the auteurs could only dream of.