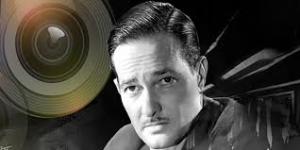 "Of all the people who make up a movie production unit, the cameraman is the only one who can call himself a free soul."
~ Gregg Toland

Gregg Toland led a short life by most measures, a mere 44 years from 1904 to 1948, but his 20 years spent in Hollywood as a technician and cameraman left a lasting legacy. Toland started as an odd job boy but when sound films came along in 1927 he distinguished himself by devising a method to silence the noisy new cameras. This allowed the camera to move in same way they could before sound film arrived, and in 1928 he became one of the youngest cinematographers in Hollywood. He quickly made a name as a reliable and efficient cameraman while working for many jobbing directors like Meryn LeRoy or William Dieterle, with the occasional project for an A-list director like Leo McCarey. Toland worked consistently for producer Samuel Goldwyn throughout the 1930's and there he came into contact with a director who would feature heavily in his future in William Wyler. He also hooked up with A-lister Howard Hawks at Fox, making The Road to Glory with Frederic March starring.

In 1935 Toland shot the intense drama of These Three for Wyler, and then created a visual masterpiece for the Broadway sourced play, Dead End a couple of years later for the same director. Their methods hit pay-dirt for Toland in 1939, where he won an Oscar as Best Cinematographer for Wyler’s Wuthering Heights, starring Laurence Olivier and Merle Oberon. John Ford availed himself of Toland’s talent on two masterpieces in 1940, The Grapes of Wrath and The Long Voyage Home, both works of breathtaking visual beauty in Black and White.  It was the Ford connection that led to Toland’s most famous film work, on Citizen Kane for Orson Welles in 1941, who took Ford's lead and teamed up with the master lensman after he offered his talents to the project. It speaks to Toland’s tolerance and vision that he wanted to help and be a part of a film that many Hollywood insiders hoped would fall flat on its face, and he backed Welles, embracing the new directors ignorance and willingness to learn and challenge the status quo . Welles famously (and facetiously) said he learned everything about cinematography from Toland in 30 minutes, but Toland secretly coached him on-set so the boy wonder wouldn’t look out of his depth to the other crew and their collaboration produced a visual and influential landmark, mostly ignored by the Academy because of the politics surrounding the film, not because of its quality.

During the war Toland became part of Ford’s navy field photographic unit, and together the pair distinguished themselves by filming December 7Th, a documentary on the attack on Pearl Harbour, for which he won another Academy Award in 1945. Prior to the war he also made another two fine films with Wyler, the striking The Westerner, with Gary Cooper and Walter Brennan, and The Little Foxes, with Bette Davis. He also made two more films with Hawks, the flawed but visually stunning The Outlaw, and the Billy Wilder scripted masterpiece Ball of Fire. After his distinguished service he signed on for Wyler’s gritty post war study in repatriation issues for ex-GI’s, the wonderful, The Best Years of Our Lives, with Frederic March and Dana Andrews. It duly won Best Picture and Toland was at the top of game, all of his renowned deep focus skills from Citizen Kane coming to the fore in the multi-layered tale. He was to die early, barely two years later after the odd career sidestep with Disney’s clunky, racist and badly misjudged Song Of The South, and the peculiar musical remake of Ball of Fire with Danny Kaye, called A Song is Born, also directed (but loudly disowned) by Hawks. The only bright spots were a re-teaming with Leo McCarey for The Bishop’s Wife and with Sam Goldwyn, for whom he fittingly shot his last film, the otherwise undistinguished Enchantment, in 1948.

Gregg Toland worked incredibly hard at his art and always pushed the technical envelope, searching for better ways to shoot features, defining the deep focus technique in the process and setting new standards for quality in the art form. His relatively small but influential body of work was enough for him to still be voted by his peers as one of the Top Ten Cinematographers of all-time in 2017.