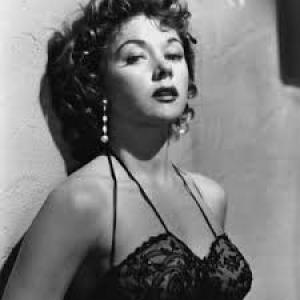 "It wasn't the way I looked at a man, it was the thought behind it."
~ Gloria Grahame

Born Gloria Hallward in Los Angeles in 1923, she was the daughter of a stage actress and after studying the craft with her mother went east to work on Broadway in the early 1940s. Ironically it was there Louis B. Mayer saw here and offered her an MGM contract that sent her back west. She worked in a couple of minor films that lazily took advantage of her sexuality and good looks before she made a mark in Frank Capra’s eternal Xmas fable, It’s A Wonderful Life in 1946. The following year she worked for Edward Dmytryk in the anti-Semitic themed Fox hit, Crossfire, for which she was nominated for a Best Supporting Actress Academy Award.

Quality directors noticed her spiky screen presence and Mark Robson cast her in his western, Roughshod, and Nicholas Ray not only cast her in his film noir, A Woman’s Secret (with Maureen O’Hara) but he married her into the bargain. The truth was that the relationship was troubled from the start, they married because Grahame became pregnant and Ray decided to do the right thing, but they split up and reconciled several times until Ray says he caught her in bed with his 13 yr. old son from a previous marriage. Grahame always denied the allegation after she later caused a scandal by marrying the son and having two children by him some years later.

It was in Film Noir that Grahame found her natural cinema home, and even though they hated each other, Nicholas Ray cast her opposite Humphrey Bogart in the fine noir, In a Lonely Place. Bigger projects seemed possible as no less than mainstream legend Cecil B. DeMille used her to great advantage in his ensemble circus hit, The Greatest Show on Earth, but it proved to be her only brush with blockbuster success. She found a good part in Josef Von Sternberg’s stylish and under-rated Macao, playing a saloon girl type, but making it her own. Sudden Fear was a solid noir against Joan Crawford and Jack Palance, before a memorable role arrived via Vincente Minelli’s excellent The Bad and The Beautiful, which garnered her an Academy Award for Best Supporting Actress, albeit in one of the shortest minutes of screen time in Oscar history.

Grahame hit a hot streak on the back of the Oscar, notching up several fine films for notable directors, without breaking out to fully fledged stardom in the way her contemporary Marilyn Monroe did. Elia Kazan used her talents well in Man on A Tightrope, an odd Eastern European circus story and Fritz Lang gave her two fine roles in the blistering Noir, The Big Heat and Human Desire, a remake of a Jean Renoir classic and both outstanding Glenn Ford vehicles. She was well matched against Sterling Hayden and Gene Barry in the stylish Ross Hunter production at Universal (shot beautifully by Russell Metty) Naked Alibi, and Vincente Minnelli used her again in his drama The Cobweb, opposite Richard Widmark and Stanley Kramer gave her a meaty part in Not As a Stranger, a solid ensemble piece against Olivia De Havilland, Frank Sinatra and Robert Mitchum.

During that period, she made a couple of effective British films, a rarity for American stars, with Lewis Gilbert’s The Good Die Young and The Man Who Never Was  for Ronald Neame. A big hit musical version of Oklahoma! provided a surprising support role, and apart from a forgettable western with Rory Calhoun, she finished her finest decade with a role in Robert Wise’s masterful Odds Against Tomorrow, one of the final, classic Film Noir’s. Gloria Graeme’s film career, for all intents and purposes, ended in 1960. She focused on stage work, had a personal scandal when she married her former step-son and had his child, and appeared in a couple of oddities before the last film of note she worked on, a cameo in the quirky Jonathan Demme directed Melvin and Howard.

Gloria Grahame shone briefly but shone bright. She graced the presence of many a fine and memorable film from Hollywood’s post war era, sometimes on the periphery and sometimes in the centre of the action. She was sexy, lithe and mischievous, bright and snappy, always interesting and capable. More than a pretty face, an interesting face, and a blonde who bucked the buxom Monroe trend and made an indelible presence in her own space... and that’s enough.