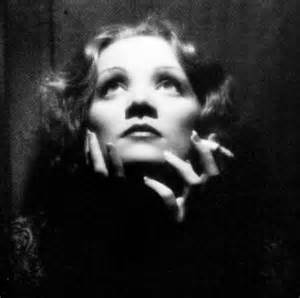 "I had no desire to be an film actress, to always play somebody else, to be always beautiful with somebody constantly straightening out your every eyelash. It was always a big bother to me."
~ Marlene Dietrich

Born in Berlin after the turn of the century, Marlene Dietrich worked as a chorus girl in the dizzy cabaret days of the Weimar Republic as Germany attempted to forget the pain of WWI. She branched into film with minimal success until an expatriate American filmmaker called Joseph Sternberg reinvented himself as Josef Von Sternberg and made the showgirl classic The Blue Angel,  with Dietrich in the iconic role of Lola Lola. Von Sternberg convinced Paramount to offer Dietrich a standard 7 year contract and the actress relocated to California and made her first Hollywood film with Gary Cooper as her lead, the astonishing Morocco,  with Von Sternberg again in charge.

The film was another hit and Paramount sensed it had their equivalent to Greta Garbo on their hands, an exotic, mysterious and glamorous star to take audiences minds off the Great Depression. Von Sternberg recognised that he had at last found his muse and proceeded to monopolise Dietrich to the exclusion of all others, but his obsession with the beautiful star meant he managed to get almost every other interested party offside. The pair collaborated on 6 of her next 7 films, only Rouben Mamoulian got a look in for The Song of Songs  in 1933, and when the last few failed to make money Von Sternberg found he had no allies to keep him or Dietrich at Paramount.

The pair never worked again, but their seven films together are amongst the richest experiences classic cinema has to offer. Shanghai Express  remains a remarkable highpoint of studio art, so good even Frank Capra felt obliged to copy it in his (admittedly very fine) The Bitter Tea of General Yen.  The Scarlet Empress  is a riot of rococo design and shadow play, as is their final film, the wonderful The Devil is a Woman.  Von Sternberg claimed to have discovered Dietrich, even though she’d made almost 20 films before The Blue Angel,  but no matter his exaggerated view of his own role he can justifiably claim to have delivered screen immortality to her via their brilliant partnership. Paramount bought her out of her contract and gave Von Sternberg his marching orders in 1936. Dietrich immediately made a film with the reliable Frank Borzage who re-teamed her with Gary Cooper in the enjoyable romp Desire.

Von Sternberg however, never recovered, as Marlene reinvented herself after a few failures at other studios, specifically in the role of Frenchy, opposite James Stewart in the charming comic western, Destry Rides Again,  in 1939. The war intervened and apart from some filler material with undistinguished directors, and a couple of John Wayne vehicles, Marlene devoted her time to supporting the fight against the Nazis. She took US citizenship in 1939 and as a staunch anti-fascist she had more reason than most to fight Hitler, especially as she’d been offered a key role in the German film industry by party officials if she’d return to her homeland. Her tours of the front lines and her ability to sell war bonds earned her the US Medal of Freedon and the French Légion d'honneur.

Dietrich knew the secret to getting great screen performances was to work with great directors, and the only one who qualified during the war years was Raoul Walsh, who made the moody Manpower,  with Marlene caught between Warners stalwarts Edward G. Robinson and George Raft. After the war she sought out Billy Wilder, Alfred Hitchcock and Fritz Lang et al, and solidified her late career reputation with fine performances in A Foreign Affair, Stage Fright  and Rancho Notorious  respectively. She also went to France to make a film with one of her many lovers, the French legend Jean Gabin, where she co-starred in the crime flick Martin Roumagnac.

Dietrich ensured her durability by touring a live show and singing songs she’d made famous in her films, and in the mid ‘50s she employed a young Burt Bacharach to be her musical director. She made a couple of superb character parts for her friends to add to her rich film legacy, in Touch of Evil  for Orson Welles and Witness for the Prosecution  for Billy Wilder again. She made a worthy and appropriate final, major feature in Stanley Kramer’s, Judgement at Nuremberg, apart from a couple of cameos and voice-overs in her later years.

Marlene Dietrich was the last word in glamour and poise in an era synonymous with style, the golden age of Hollywood. She survived the WWI in Germany and the Depression and WWII in America, providing escapism and glamour in trying times. She lived an unconventional life, living in an open marriage with her husband as she took many lovers of both sexes. She bravely mashed gender roles before any mainstream audience had any idea of the reality behind the cross dressing. She had a natural charisma and innate ability to play to the heart of each role she took on, a true star at a time when there were more stars in Hollywood than in the heavens.

Dietrich was no vapid airhead, she claimed to never have enjoyed film acting, and had an intelligence and wit not often associated with beautiful women of her era. She was a survivor, one who inhabited the role of a star as if it was a foregone conclusion, while she led a full and interesting life off the radar as a friend of intellectuals, artists and adventurers, surely having the last throaty, deep hewn laugh in the process. She was a paragon of elegance and one classy broad.