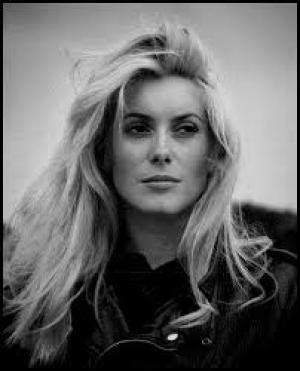 "Being an actor means being an instrument for someone else. I want to give myself completely."
~ Catherine Deneuve

Born Catherine Dorléac, Catherine Deneuve rose to prominence as an actress with Jacques Demy’s The Umbrellas of Cherbourg, in 1964, but her radiant physical beauty had been turning heads in the modelling world for some years prior. Like her sister Françoise Dorléac, she went into acting and after several small roles in the early 1960’s, Roger Vadim gave her a break-out role in Vice and Virtue in 1963. After the Demy vehicle effectively made her a star she enhanced her acting credentials with superb performances in Roman Polanski’s Repulsion, in 1965 and in her iconic title role for Luis Bunuel’s in Belle De Jour in 1967. That same year she starred with her sister opposite Gene Kelly in Demy’s The Young Girls of Rochefort, before her sister was tragically killed in a car accident at the age of 25.

Deneuve maintained a steady rate of work and unsurprisingly she did her best work with A-list directors, like Truffaut, in Mississippi Mermaid, opposite Jean-Paul Belmondo, and for Bunuel again in the offbeat Tristana, opposite Fernando Rey. Jean-Pierre Melville cast her opposite Alain Delon in his excellent policier and final film, Un Flic. During this phase, Deneuve made several forays into English language films, with varying results, firstly with Terence Young’s Mayerling, opposite Omar Sharif, for Stuart Rosenberg in The April Fools, opposite Jack Lemmon and later for Robert Aldrich in Hustle opposite Burt Reynolds and for Dick Richards opposite Gene Hackman in March or Die.

Deneauve’s personal life often intersected with her working life – she had an affair with Roger Vadim in the early 1960’s and had an intense relationship with Truffaut for two years at the end of the decade. She had a daughter with Italian actor Marcello Mastroianni during their time together in the early to mid 1970’s, a period in which they also made 4 films together, including Demy’s broad comedy, A Slightly Pregnant Man. After a series of nondescript films in the late 1970’s, her ex-lover Truffaut gave her one of the roles of her career in the very fine war-time drama, The Last Metro, opposite Gerard Depiardieu in 1980, for which she won a Cesar for Best Actress. This kick-started a run of quality films, rather than quantity, and she teamed up with André Téchiné for the first of several collaborations in Hotel America. She scored a rare American hit with Tony Scott’s The Hunger, opposite David Bowie and Susan Sarandon, and made another fine film with Téchiné in Scene Of The Crime in 1986. She found another quality project in Indochine, a film by Régis Wargnier, and the film won the Academy Award for Best Foreign Film and Deneuve was nominated for Best Actress.

In the intervening decades Deneuve has worked consistently with inconsistent results, but in films in which she was pushing boundaries and creating interesting, dimensional characters. André Téchiné again provided two of her most significant roles with My Favourite Season in 1993 and Thieves in 1996. She made the controversial Pola X with Leos Carax and worked for iconoclast Lars Von Trier in 2000’s equally controversial Dancer In The Dark, opposite Icelandic musician Björk. During this period, she also made another film with Wargnier, East-West, opposite Sandrine Bonnaire and the very fine Time Regained, for Luis Ruiz.

In the 21st century she found another fine collaborator in François Ozon and made 8 Women and Potiche with him in 2005 and 2010 respectively. She continues to add style and class to whatever she attaches herself to, and a couple of late career worthy efforts are found in Despleschin’s A Christmas Tale, Christophe Honoré’s Beloved and Téchiné’s In The Name of my Daughter.

From the time she achieved stardom, Catherine Deneuve was lumbered with the unenviable and impossible task of personifying the highest ideal of French beauty and given the era she worked in and the machismo and sexism she would have encountered, it’s a wonder she survived at all. Not only did she survive, she proved to be a fine actress and an even finer human being, lending her name and clout to many humanist and liberal causes. Deneuve’s body of work has provided a litany of wonderful characters, of women at many stages of life, vulnerable and exposed, clear-eyed and driven and it’s a testament to her artistry that she could rise above her (for us) distracting beauty and get to the heart and humanity of the matter.