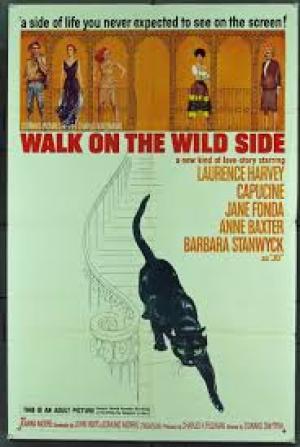 Walk on The Wild Side

A hustle here and a hustle there...

"Technical skill counts for nothing if it is used only to manufacture films which have little to do with humanity".
~ Edward Dymtryk

This odd little curio, a kind of rickety bridge between Old Hollywood and the soon-to-be New, has some compelling features and some predictable limitations for an American film made in 1962 and set in a Great Depression era New Orleans brothel. Edward Dmytryk directed the piece, based on a Nelson Algren novel and delivers an interesting faux-Tennessee Williams melodrama with stand-out performances from Barbara Stanwyck, Anne Baxter and a young Jane Fonda, slightly compromised by the odd casting of Capucine playing a glamourous hooker and Laurence Harvey playing a Texan. The film has a noteworthy score from Elmer Bernstein and is shot beautifully in black and white by Joe MacDonald and an arresting title sequence from Saul Bass, A-listers all, which all adds up to a potent and atmospheric stew.

Dove (Laurance Harvey) is a quiet Texan on a quest to find his lost love, Hallie (Capucine) and hooks up with another drifter, Kitty Twist (Jane Fonda) as they scratch their way south towards Louisiana. They encounter Teresina (Anne Baxter), a kindly truck stop owner and after Dove and Kitty have a falling out Dove stays on to earn some money as a hired hand so that he can finance his continued search. Teresina soon falls in love with the Texan but aids him in his attempt to find Hallie, located in The Big Easy and working at The Doll House, a brothel run by Jo (Barbara Stanwyck). Dove attempts to lure Hallie away from the comfortable if tawdry life she’s fallen into but Kitty’s arrival to work at the establishment adds an unexpected complication.

Walk on The Wild Side pushes as hard as it can (given the moral strictures of the era) as American film had yet to throw off all the shackles of the Production Code. Otto Preminger had released a film in 1953, The Moon Is Blue, with no approval by the Breen Office, and it had done well, and he further pushed boundaries with Nelson Algren’s The Man With The Golden Arm in 1957, as post-WWII audiences wanted a harder edged entertainment on the big screen. Incredibly, Billy Wilder’s masterful and eternal Some Like It Hot did not receive Code approval, and its subsequent release and success severely weakened the Code’s authority. Foreign films like Louis Malle’s 1958 masterpiece Les Amants (The Lovers) were still being challenged in US courts as being pornographic, and that film would win a famous ruling in 1964 where the judge declined to categorise the film as “hard-core pornography, saying it was not, reasoning, “I’ll know it when I see it”.

The Code apparatchiks would have been primarily concerned with Jo, the Stanwyck character, who professes an upfront desire for Hallie, and the sight of an older, stylish Stanwyck, lustfully licking her lips over one of her girls is startling enough. Stanwyck was now entering her Grand Dame phase and would soon to be a TV regular with the mainstream hit The Big Valley, so for her to take this role and play it so brazenly is a ballsy move from an actress who always carved her own path. It’s also sweet to see her in a fine scene with a feisty Jane Fonda, only in her second film, as Stanwyck had acted with Jane’s dad Henry Fonda in three films, notably in the superb Preston Sturges hit, The Lady Eve some 21 years prior and had in fact had an affair with Henry at the time. Anne Baxter is wonderful in a role she should have been miscast in, as a Mexican truck-stop owner with a good heart and she works wonders in the role. It many ways it is the emotional centre of the film, and a palette cleanser to the distasteful going’s on in the lives of the other protagonists. In the same way Harvey does well in a role that should not work on paper, but his restraint (the unkind amongst us would say lack of acting ability) plays well against the fireworks most of the women give off when the melodrama bubbles over.

Jane Fonda is a revelation in Walk on The Wild Side. For viewers who though she coasted through the first decade of her film work in good girl roles, this little seldom seen gem of a performance affirms the grit and range were all in evidence early on. She’s simply startling as the nasty, self-centred and scruple free Kitty, and would not get an opportunity to show her edginess until several years later as Gloria, in Sydney Pollack’s seminal They Shoot Horses Don’t They? Fonda soon settled into mainstream if pleasant enough roles that did little to challenge her acting chops, (Period of Adjustment, Sunday In New York) before moving to France and marrying Roger Vadim which led to the bizarre sideways step of Barbarella in 1968. She’d tried to do interesting American films with mixed results (The Chase, Hurry Sundown) but the line-in-the-sand moment was Pollack’s film and from there she truly found her voice and moved out of her father’s shadow.

Edward Dymtryk was an Academy Award nominated and commercially successful director in the 1940’s before HUAC knocked on his door and upended his cozy world. He spent time in gaol as one of the infamous Hollywood Ten, before recanting and naming names to HUAC in an attempt to resurrect his career. By 1962 he’d spent 10 years working in the system and had helmed several classic films, including The Caine Mutiny with Bogart and The Young Lions with Brando and Montgomery Clift. Dmytryk would never be championed as an ‘auteur’ but his steady eye and ability to frame a story would keep him in work and produce many films of lasting worth. One of his strengths was his ability to draw fine performances from many types of actors and Walk On The Wild Side benefits hugely from his empathetic touch in this area. Harvey, a limited actor, portrays an affecting vulnerability and brittleness as the decent farmer come to town, and Capucine holds her own as the damaged goddess/whore, a thankless role at any time. But the film belongs to the stylish technicians and the stellar supporting cast who serve to create an atmosphere of decay and corruption beneath the fading grandeur of the Doll House, in an era where the Code was not quite finished, and the Hollywood Film Brats had yet to take over the asylum. Well worth a look. 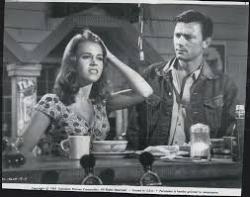 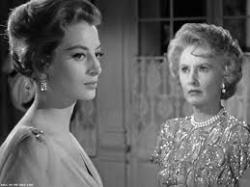