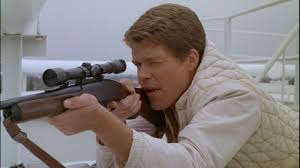 "Horror means something revolting. Anybody can show you a pailful of innards. But the object of the roles I played is not to turn your stomach - but merely to make your hair stand on end." - Boris Karloff

In late 2017 a sombre Texas record that had stood since 1966 was broken, the greatest number of people killed in a mass shooting, as the name of Sutherland Springs was added to the kind of list no town aspires to - Columbine, Sandy Hook, Las Vegas, with no doubt more to come.  The event that the latest tragedy overtook was the seminal shooting spree of Charles Whitman, who killed 17 people at a University, 3 on the ground and 14 from the University tower, where his skills as a decorated military marksman came into their own. Peter Bogdanovich had served a lighting fast apprenticeship with Roger Corman on a low budget shocker called Voyage to the Planet of Prehistoric Women, before he wrote and directed his first proper film, Targets, based on the 1966 shootings. In true Corman fashion he was instructed to find a part for aging horror film veteran Boris Karloff, who owed Corman a couple of days work, so Bogdanovich ended up with his ‘film within a film’ idea and even cast himself as Karloff’s director. Bogdanovich’s wife, Polly Platt, co-wrote the story and the great cinematographer László Kovács started what would be a seminal association with Bogdanovich, eventually collaborating on 6 films together.

Bobby Thomson (Tim O’Kelly) is an All-American clean-cut young man, ex-military, engaged to be married to an equally clean-cut girl, living at home with his Leave It To Beaver parents. But Bobby has a secret life, one driven by an internal compulsion he doesn’t understand and is apparently powerless to fight. Sammy Michaels (Peter Bogdanovich) is a young film director trying to convince ageing star Byron Orlock (Boris Karloff) not to retire. The two worlds collide when Thompson holes up in a Drive-In theatre with an arsenal of weaponry, intent on continuing a killing spree he’d embarked on earlier at home and on a freeway. Orlock is making his last personal appearance to support a B-grade horror film, the type he’d been reduced to performing in.

Orlock laments that the real horror of modern day life is the daily news, not the thrills and scares provided by his brand of make believe horror. Bogdanovich focuses on the true banality of evil, the early scenes of Bobby walking through his own home like an intruder, a stranger, are beautifully realized and quietly chilling, underlining the ordinary nature of the brutality that is to come. The director even makes a point of the ubiquity of guns in the community in the final scenes when other citizens reach for their guns to fight back against Thompson. In retrospect Bogdanovich was merely pointing to the tip of the iceberg in a country where Thompson could easily buy an armoury of guns as casually as he stuffed his face with chocolate, the ultimate consumer society.

In the political environment of the time, post JFK but prior to MLK, RFK and The Manson Family, the Texas shootings caused a national existentialist crisis similar to the Clutter farm killings in 1959, where a stolid and respectable rural family were brutally murdered in the dead of night by two small time criminals, Perry Smith and Dick Hickock. The intervening 6 years was a time of massive change and upheaval in America as the rise of the counterculture threatened the established conservative post WWII order. In concert with changing times and ebbing collective confidence, the loss of certainty in the doctrine of American Exceptionalism, America (or more particularly white America) seemed to develop a national paranoia and armed itself in unprecedented numbers. The civil rights movement provided the impetus for the white population to arm itself as never before, with quasi-racist gun groups lining up on the sideline cheering them on, and gun manufacturers making a killing in every sense of the word.

When common sense regulation threatened to mitigate this gun spree, particularly after the Reagan shooting in the 1980’s, the National Rifle Association and their cronies started to heavily lobby, threaten and cajole politicians of all stripes to ‘keep your hands off our guns’. They then pushed the ugly and specious canard that personal gun ownership was a constitutional right, conflating a post-colonial law designed to protect a young country without a standing army from alien invasion, with the right for an individual to own as many guns as they’d like, even the military issue automatic weapons that do so much damage.

In a grisly side note, and completely in sync with modern era addiction to Reality TV, the slaughter was filmed via the Sutherland Springs Church YouTube channel. It was said at the time of Sandy Hook if the majority of Americans could see the condition of the children’s bodies after the massacre then guns would be banned overnight, a notion I naively subscribed to. In a similar act of tempered optimism for some semblance of sanity to take hold and turn the ship in relation to guns laws, I wrote up Bowling For Columbine, and included in it a detailed account of what happened in my country when a gun massacre triggered national outrage and a change in the law. I forlornly hoped that Americans would see a path to change, to see gun ownership as just another civil right that needed to be regulated, and not a right that, err... trumped all others.

I also posted some thoughts on a film site, encouraging Americans there to reach for the better angels of their nature in this debate and pass some common-sense restraints on unfettered ownership. What I witnessed there in the next three months was astonishing – on this outwardly benign site an outpouring of scorn and vitriol and uncivility forced me to abandon dialogue and withdraw in mild shock. The forces that drive the gun debate in America are indeed deep, fractured and unlike any other comparable western country. The experiences of Australia, Canada or Japan may as well be from Mars. It seems America will spend trillions on the minimal threat of foreign terrorist attacks, but next to nothing addressing the much more prevalent home grown threat. The gunman at the 2017 Las Vegas shooting befuddled the nation it seems - white, comfortably off, no criminal record, in other words, (just like Whitman) one of their own.

So, for those of us that thought Sandy Hook would be a turning point, we were wrong. Obviously once America tacitly sanctioned the killing of schoolchildren as, to quote the disgraced and former Fox News doyen Bill O’Reilly, “The cost of our freedom to own guns”, then nothing would change no matter how horrific the number or how easy the killer armed himself to the teeth. Should Congress or President Hyperbole and other pathetic Gun Lobby enablers be made to view the Sutherland Springs tape? Would it change anything? After the Las Vegas massacre Congress briefly flirted with the idea of banning Bump Stocks (we all know what they are now) but crawled back under its rock once the NRA coughed to clear its throat. President Obama attempted to push back against the gun industry after Sandy Hook, and got nowhere, leading him to state that the only way change would occur was when ordinary, decent Americans organized themselves in the same way the Gun Lobby has, and given that they theoretically outnumber the gun nuts, they should eventually prevail. And still the world waits.

Targets is a small miracle of a film, compelling and thought provoking, made on a shoe-string. Filmed before the MLK and RFK killings, but released soon after, it should have been a timely retort to the increasing power of the gun culture, but 50 years on it reads as a warning that went unheeded. It could be made again today, just the faces and names and locations need to change, but the result sadly remains the same. 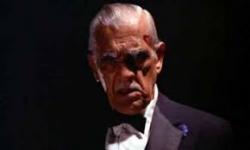