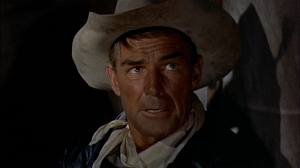 7 westerns from now... Ranown cyclists at the start line.

(John Wayne said to me) "I’ve got a script over here I want you to read.” I picked it up at lunch and I read thirty-five pages and I walked back on the set and I said, “Duke, I want to do the picture.” He said, “Well Jesus Christ, you can’t read the whole damned script in an hour.” I said, “I read thirty-five pages. This is brilliant! I’d like to meet the author.” He said, “Bood Boetticher, Burt Kennedy.” ~ Budd Boetticher

After the Second World War and a temporary surge in box office receipts Hollywood underwent massive change as several seismic events altered the film game forever. The government cracked down on the industry via anti-trust laws to break up any monopolies the studios held in manufacturing and distribution, and smaller players jockeyed for a bigger slice of the pie by setting up Independent production companies. Television acted as yet another blow to the hegemony of the majors, and soon westerns became so commonplace on that medium their impact at the cinema was inevitably diminished.

Before the western rode off into the sunset there was a late cinematic flowering in the latter half of the ‘50’s and early ‘60’s, and amongst the most worthy of those entries are the Randolph Scott and Budd Boetticher collaborations. The pair, along with producer Harry Joe Brown formed a team and produced seven vibrant westerns together, which became known as the Ranown cycle, after the name of Scott and Brown’s company. The first of the Scott and Boetticher collaborations was 7 Men from Now,  produced by John Wayne’s company, who purchased the Burt Kennedy script only after Robert Mitchum had threatened to do so.

Boetticher opens the tale as two men shelter from the teeming rain in a cave, a tall stranger enters and takes a cup of coffee from them. A shootout ensues and we discover that one of the men, Ben Stride (Randolph Scott) is on a personal vendetta, tracking down seven villains he deems responsible for the death of his wife. Stride stumbles upon John and Annie Greer, a couple of greenhorns making their way west, and stops to help them with their bogged down wagon. Stride stays with them for part of the journey, recognising their vulnerability, and becomes attracted to Annie (Gail Russell). The group encounter a pair of gunmen at a relay station, and one of them, Bill Masters (Lee Marvin) informs Stride they are chasing stolen money from the robbery that caused his wife’s death. All intend to continue to Flora Vista, where Stride hopes to find the other five men he’s hunting, and John and Annie the start of a new life in the west.

Stride’s dilemma is a common one in the Ranown cycle, a decent man who has to right a wrong, either for himself or on behalf of someone weaker. In this case he’s seeking justice for his dead wife and redemption for himself, but seems sidelined from his quest by feeling obligated to protect the greenhorns, before both elements intersect. Masters becomes an agent provocateur after he recognises Stride’s attraction to Annie, provoking the situation in respect to the weak husband at every turn, asking Stride, “Why a full woman like that would settle for half a man”?  Stride eventually sums up his feelings when he tells her, “A man ought to be able to take care of his woman”,  Annie replies, “Do you think I love him any less”? “Yes Ma’am”  is the eloquently brief reply. That dialogue explains in a nutshell the appeal of the cycle, where action trumps dialogue in an environment where ‘doing’ is essential and thinking analytically is a luxury.

Scott’s presence and air of quiet dignity is the cornerstone to the cycle, aided by sharp scripts that don’t veer too deeply into the trendy, psychological western terrain then popular, keeping a modicum of old style directness. Boetticher makes keen choices in his framing, formal but never showy, and never holds a shot too long when a cut is called for, keeping the pace up at all times. He counterpoints this with sequences of breathless tension as exampled by the scene where the married couple and Stride and Masters share a wagon in the rain. The sequence is simply brilliant filmmaking as Masters uses the opportunity to ‘make love’ to Annie, without laying a hand on her, via his salacious storytelling and there’s not much Stride can do about it. A little later Stride feels the same intense yearning for Annie as he lies on the ground under the wagon while she is bedded down above him, a few wooden boards and societal conventions separating the two.

Boetticher and Scott adopted a no nonsense approach to the westerns they produced, providing a stark and stripped bare aesthetic that reduced the narrative to its essence, the antithesis of the large scale Hollywood productions they competed against as epitomised by the ‘sword and sandal’ epics of the period. Burt Kennedy supplied the script, which was initially purchased by John Wayne as a vehicle for himself, but he opted out after John Ford presented him with The Searchers.  Wayne hired Boetticher, and crucially suggested the semi retired Scott as lead and 7 Men from Now  became their first Kennedy script of an eventual five he would provide for the cycle, although one was credited to the problem stricken Charles Lang as a kindness from Kennedy. Kennedy was a genuine WWII hero, a decorated cavalry officer who stumbled into the movie business by accident after the war and after his script writing career he moved into writing and directing, eventually he made 2 dozen feature films over a 30 years period, almost all of them westerns.

In a gesture of friendship and support John Wayne cast the alcoholic Gail Russell as Annie, and she turns in a fine performance as the conflicted woman. Sadly she was unable to get her condition under control and died of an alcohol related illness barely 5 years later. Lee Marvin is superb as the villain Masters, an early indication of the star potential that would eventually be unlocked, especially by John Ford in The Man Who Shot Liberty Valance  where Marvin delivers a star performance in the smaller title role. Boetticher opted for the Hitchcock-ian strategy of casting strong, charismatic villains in order to make them less of the old style of caricature, and this also served to heighten the odds for the hero, making the films more dimensional all round.

The western became a staple of television in the 1950’s and quality notwithstanding the ubiquitous nature inevitably led to over familiarity and diminishing effectiveness. The Ranown films quietly worked a furrow that was increasingly ignored in the world of feature films, and the seven films all stand up well against even the A-List entries in the genre. Modestly budgeted and efficiently scheduled they remain an object lesson in letting professionals get on with a job, and affirm the value of buying a good script and employing good technicians and actors to film it. Budd Beotticher proved the perfect director to helm these Ranown projects, and carved himself a significant legacy in the western genre by doing so, as exampled by the very fine, 7 Men from Now.