"Sold in a market down in New Orleans"...

America is still coming to terms with the stain of slavery, some 160 years after Lincoln’s 1863 proclamation to free the slaves. Some of the issues stem from the contradictory nature of the founding principles of that country, Puritanism and Libertarianism, more of that later. Some are understood by the philosophies found in the Constitution, set in the eloquent and immortal words of Thomas Jefferson that “All me are created equal”. This “self-evident truth” was somewhat diluted by the fact that some of Jefferson’s own children were slaves, courtesy of his fathering of six children by his slave concubine Sally Hemings. That an intelligent and compassionate man like Jefferson could rationalise this obvious hypocrisy, and  let his own children live in slavery, speaks volumes about the complexities in reality, of a notion, that in theory is a very cut and dried moral equation. Steve McQueen’s harrowing examination of the reality of slavery is no easy viewing experience, which is entirely his point, and it speaks to these perplexing contradictions.

McQueen was researching a movie on slavery, with his writer John Ridley, finding himself stalled and unsure how to progress, when his wife found Solomon Northup’s book and out of nowhere he had his film. That slavery is an inhuman evil is a given, the challenge is to create a film that engages and communicates, rather than a pandering and condescending piece of easy condemnation. McQueen finds nuance and dimension in the situation, alluding to the contradictions inherent in an unjust system sanctioned by Government, Business and Church. The character of Solomon distils the wider issues down to the very human predicament on one man trying to reconnect with his family, allowing modern audiences an easy point of connection to so foreign a reality.

Solomon Northup (Chiwetel Ejiofor) is a talented violinist, a black man living in New York with his wife and two children. While his family are away fro a couple of weeks he accepts an engagement in Washington from two promoters who end up drugging him and selling him to the slave trade. Northup is trapped in a series of field work jobs on Louisiana plantations, unable to find a way to freedom. Northup experiences the full gamut of the slave condition, until he persuades a kindly Canadian carpenter (Brad Pitt) to contact his family and set the wheels in motion for his freedom.

McQueen forsakes his more ‘impressionistic’ filmic techniques, used so effectively in Hunger  and Shame,  for a more conventional narrative unfolding of events. There are still the lingering and still moments that invoke his more ‘European’ sensibilities, and they are incisively used to show the banality of the evil at the core of Southern slavery. A bravura sequence has Solomon almost hanged, and waiting for his Master’s return as he struggles to keep himself alive on the end of a rope, the scene unfolds where an empty background is gradually filled by other slaves going about their regular business, including young children playing. It’s a devastating reminder of the powerlessness of the blacks, another nigger being hanged was nothing unusual, and to interfere with Master’s business was to court death. Moral courage was therefore impossible on the slave side of the deal.

McQueen, as a black man and a non-American is looking at the end result of a system that Britain also benefited from for many years, and the questions it asks are asked of all ‘civilised’ society, not just America. Slavery was driven by an economic principle primarily, and the benefits cheap (free) labour brought to an economy. Britain had effectively abolished slavery by 1799 within its own borders, and that extended to the rest of the Empire by 1830. The South was struggling with the fact slavery was illegal outside its borders after 1807, but was legal within its boundaries until 1863. Nearly one million African slaves had multiplied into approximately 4 million by the 1860 census. Part of Jefferson’s ambivalence to his own principles lay in the fact his slaves underpinned the economic viability of his family business, and when Congress took out his suggested anti-slavery clause in the Constitution he said nothing.

The backbone of American capitalism was, in some significant part, built on the back of cheap slave labour, and hard nosed numbers men were at the core of the calculations. When Solomon is up for sale with Eliza and her two children, a customer asks the dealer (Paul Giamatti) to sell him the children with the woman, “Have you no sentimentality Sir”,  the dealer coolly replies, “My sentimentality stretches the length of a coin”.  When Eliza and Solomon arrive at the plantation the mistress enquires as to the reason for Eliza’s constant and racking sobbing, when she is told she says, “Something to eat and some rest; your children will soon enough be forgotten”.  The idea that slaves have the same feelings as their owners is non-existent, and reinforced by a quick vignette in a store in New York. Solomon and his family walk in to buy a bag for his wife’s trip, another black man follows them in, plainly mesmerised by the sight, only to be dragged out like an errant dog by his apologetic owner.

Religion, as it did in every aspect of American life at the time (and still does to a large extent), played a huge part in the operation of the system. Solomon’s owner, Edwin Epps (Michael Fassbender) addresses his slaves upon arrival with a reading from the Bible, and then concludes, "That nigger that don't take care, that don't obey his lord, that's his master… d'ye see?... that 'ere nigger shall be beaten with many stripes. Now, "many" signifies a great many. Forty, a hundred, a hundred and fifty lashes... That's scripture”!   As usual, the problem with scripture is it is so open to interpretation that it can be used to justify any activity whatsoever, and for every enlightened churchman that despised slavery, there were several that supported it. The many devout slaves merely accepted the anaesthetic of religion, the notion that the suffering they experience in this world will be put right in the next, where the tables will be turned on the wicked Master. A ‘collaborationist’ slave (Alfre Woodard), who rises to near ‘mistress’ status informs Solomon, “In his own time, the Good Lord will manage them all. The curse of the pharaohs was a poor example of what waits for the plantation class”.

Abolitionists worked to getting slavery outlawed, and Lincoln took his chance during the fractious and exceedingly bloody Civil War, and squeezed through the Abolitionist Act by a narrow margin. Lincoln, while personally anti-slavery, was a pragmatic politician, and stated that given a choice between keeping the Southern states in the Union, and freeing the slaves, he would choose the former. Again this highlights the bitter contradictions inherent in the debate, no matter the ‘ethical’ or human rights involved. Solomon’s Canadian saviour phrases it best when disagreeing with Epps, “The law says you have the right to hold a nigger, but begging the law's pardon... it lies. Is everything right because the law allows it? Suppose they'd pass a law taking away your liberty and making you a slave? Because the law states that your (white) liberties are undeniable. Because society deems it so. Laws change. Social systems crumble. Universal truths are constant. It is a fact, it is a plain fact that what is true and right is true and right for all, white and black alike.”

In Western civilised terms America was a pariah in terms of ‘freedom for all’, when in 1808 the US Government made importation of slave’s illegal, while still allowing internal trade to continue. This led to the inevitable rise of a, ahem, black market, and to the regular kidnapping of ‘free’ Northern black men to be sold in the South.  This accounts for the bizarre ‘shop’ incident, a jarring sequence where a Southern slave in the North and his unseen master walk the streets, and the slave is amazed to see Solomon and his family walking free. Still, the uncomfortable irony is even Russia outlawed its system of indentured servitude (serfdom) before America finally abolished slavery.

12 Years a Slave  is an uncomfortable reminder that human rights for all has been a hard won process, and moral courage, when it is desperately needed, is sometimes in short supply, both individualy and collectively. Solomon took his kidnappers and torturers to court, and had no luck in gaining any prosecutions, mostly because it was illegal for a black man to testify against a white man!  Solomon died somewhere around the time Lincoln signed the Emancipation Proclamation, but it would be another 100 years after his death for Civil Rights Act to be signed into law for black people in America, and the intervening ‘Jim Crow’ years were, in reality, only marginally better than slavery for poor black workers.

America has a beautiful constitution, one of the great documents in all of humanity, but it’s the gap between the rhetoric and the reality that still grates. Whilst every country has its problems, as does my own, America sets a ‘gold’ standard as “Land of the free, Home of the brave… with liberty and justice for all”. I think the bulk of the problems were created by her contradictory founding principles, Puritanism on one hand, and Libertarianism on the other. America started modern consciousness with one side of its brain saying “You must do this (Godly) thing”, and the other side saying “How dare you tell me what to do”!. Into this national schizophrenia the institution of slavery, perhaps not surprisingly, served to create even more paradoxes and hypocrisies.

Steve McQueen has made a vibrant and visceral work with 12 Years a Slave,  one that works on several levels, equally engaging and disturbing. It’s a more mainstream piece than we’re used to from him, but it’s a powerful examination of a hideous time, anchored by Chiwetel Ejiofor’s brilliant central characterisation of Solomon, and aided by regular collaborator Michael Fassbender’s superb work as Epps. Its ‘worthiness’, in a liberal sense, should not obscure its artistic achievement, as it’s a fine and important film. 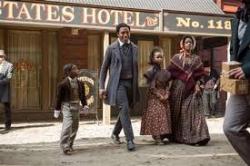 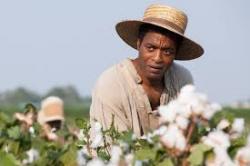 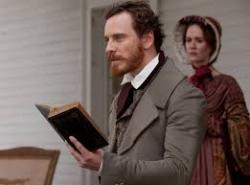 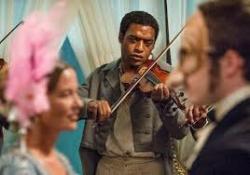 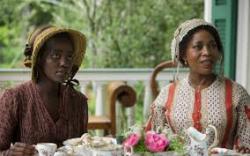 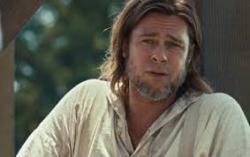