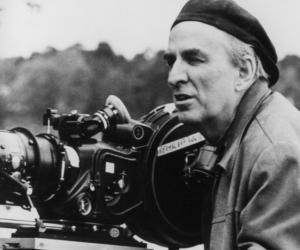 "Film as dream, film as music. No art passes our conscience in the way film does, and goes directly to our feelings, deep down into the dark rooms of our souls." ~ Ingmar Bergman

An icon of Swedish cinema, Ingmar Bergman became a mainstay of world cinema after his breakthrough films of the 1950's, and his name remains a by-word for 'director' and 'auteur'. Stanley Kubrick said about him, "I believe Bergman, De Sica and Fellini are the only three filmmakers in the world who are not just artistic opportunists. By this I mean they don't just sit and wait for a good story to come along and then make it. They have a point of view which is expressed over and over and over again in their films, and they themselves write or have original material written for them".

Bergman began his directing career in Swedish theatre and before long moved to the silver screen, and many of his early films bear the unmistakable mark of his theatre training. After a decade of fine work in local cinema Bergman came to a wider European audience with his success at Cannes with Smiles of a Summer Night,  in 1955 and then to a world audience in 1957, his Annus Mirabilis, with The Seventh Seal  and Wild Strawberries . Bergman, self admittedly 'indifferent' to politics, used his new found authority to investigate the bigger philosophical questions,  " That I wasn't interested in politics or social matters, that's dead right. I was utterly indifferent. After the war and the discovery of the concentration camps, and with the collapse of political collaborations between the Russians and the Americans, I just contracted out. My involvement became religious. I went in for a psychological, religious line... the salvation-damnation issue, for me, was never political. It was religious. For me, in those days, the great question was: Does God exist? Or doesn't God exist? Can we, by an attitude of faith, attain to a sense of community and a better world? Or, if God doesn't exist, what do we do then? What does our world look like then? In none of this was there the least political colour".

Bergman produced cinema of astounding philosophical depth, changing the way artists thought surrounding the possibilities of the medium. Bertrand Tavernier said, "Bergman was the first to bring metaphysics; religion, death, existentialism, to the screen. ... but the best of Bergman is the way he speaks of women, of the relationship between men and women. He’s like a miner digging in search of purity".  Bergman moved away from the God question, and spent most of the rest of his career, after the early 1960's in examining the politics of the personal, the prickly relationships between humans and exploring the differences between men and women. Bergman continued to dominate cinema well into his '60's, before he had a falling out with the Swedish government over a tax issue, which led to a nervous breakdown, and a period of self-imposed exile from Sweden. Bergman made several significant films after this period, including his late career masterpiece 'Fanny and Alexander', but he increasing favoured television over feature film in his later years. He died in 2007, one of the all-time legends of the silver screen, and a pioneer of auteurist cinema, and an influence on countless film directors.

Hour of the Wolf
Shame
The Serpent's Egg