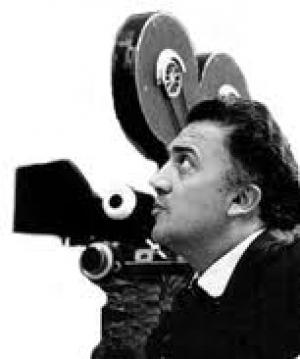 Life is a carnival

“There are very few directors, about whom you’d say you automatically have to see everything they do. I’d put Fellini, Bergman and David Lean at the head of my first list, and Truffaut at the head of the next level.”  ~  Stanley Kubrick

Fellini entered the film industry during the war years as an occasional actor and writer, cobbling together a living as a cartoonist as well, amongst other endeavours. Fellini felt the need to always throw off his provincial heritage, to strike out in the big city of Rome and he found employment at the state owned (and Mussolini built) Cinecittà in there. “Cinema is the most powerful weapon”  said Il Duce, and Fellini worked his way up with the founding fathers of neo-realists like Roberto Rossellini and Lattuada. The last phase of the war threw up the genre defining Rome, Open City  from Rosellini, the script of which included contributions from Fellini, and the film burst upon the world scene like a revelation.

The resultant Oscar nomination for his work on the script for Rome ,Open City  gave him enough confidence to continue a career in cinema in an environment when most of Europe was still on its knees. He continued as a writer on projects until he decided to pursue his directing ambitions, firstly by co-directing a feature with Lattuada, Variety Lights,  and then by going solo with The White Sheik.   Neither of these films was profitable, but Fellini then decided to examine his provincial roots with the vaguely auto-biographical I, Vitelloni.  The film was a sensitive and heartfelt valentine to small town ambition, which proved an irresistible combination when combined with Fellini’s strong feel for character and place and it remains one of his standout works.

With the European success of that film he found his stride and pushed the boundaries of Neorealism with his next film, La Strada,   which became a big international hit, finally winning direct distribution in America. The brilliant central performances from Anthony Quinn and Giulietta Masina (Fellini’s wife) captured world audiences and the film won the 1957 Academy Award for Best Foreign Film. With the cinematic world at his feet Fellini conformed to the ‘international’ model once more with the fine follow up, Il Bidone,  but took his art up a notch with the achingly poetic Nights of Cabiria,  a film that finally saw him throw off his Neorealist tag, from then on he became broadly unclassifiable, a seeming category to himself.

"Talking about dreams is like talking about movies, since the cinema uses the language of dreams; years can pass in a second and you can hop from one place to another. It's a language made of image. And in the real cinema, every object and every light means something as in a dream." ~ Fellini

Having thrown off his Neo-realist roots he developed a personal cinema, one populated with eccentrics and freaks, misfits and clowns, and one entirely his own. He teamed up with Marcello Mastroianni to create the classic La Dolce Vita,  a look at Rome as it threw off the damage of the war years and embraced the hedonism and emptiness of a ‘paparazzi’ culture. It won Best Film at Cannes in 1960 and ensured Fellini’s reputation as a director in the first rank with the cinematic world at his feet.

The resultant pressure caused Fellini to have something of a creative block, and as he had done when he’d suffered a breakdown during the intense schedule for La Strada,  he turned to psychoanalysis for help. For some time Fellini had been curious about the workings of the unconscious, the progenitor of dreams and he had became obsessed with the Jungian model of behavioural understanding, the results of which were to infect all his subsequent work.

He turned this crisis of confidence into an exercise of guerrilla filmmaking in 8 ½,  a film about a director struggling to create his next film and produced a classic. Mastroianni again took the lead and the film was lauded in every corner of the planet, winning another Academy Award for Best Foreign Film into the bargain. Fellini then took his fascination with a dreamscape palette to a new level with his next film, Juliet of the Spirits, his first feature in colour and again in collaboration with his wife, who gave a tender and nuanced performance in the title role. That film represented a rejection of any shackles and Fellini continued down that path in embracing the late ‘60s deconstructionist ethos of Godard and others in the wildly and maddeningly challenging Fellini Satyricon  and Roma.

He may have lapsed into indulgence and self parody over his latter years, particularly in his version of Casanova,  but he still managed to produce some vibrant and interesting pieces with Amarcord   and the poetic and masterful, And The Ship Sails On.  Fellini always wore his love of cinema on his sleeve and rounded out a remarkable career by teaming his two muses, Masina and Mastroianni, in his homage to showbiz, Ginger and Fred  in 1986. The maestro passed away in 1993.

One of the absolute giants of world cinema, as great a humanist as Renoir and as stylishly gifted as Bergman, Fellini always attempted to connect the human drama with the poetic dimension of life, and to entertain and amuse in his own Felliniesque way. That he did it so well is testament to his genius, as is the usage of ‘Felliniesque’ in the lexicon of film criticism - It's not many directors who have a word coined from the legacy of their influence. Bravissimo!